11 Tasty Indonesian Rujak across the Country

Rujak or salad made from fruit and vegetable is one of Indonesia's culinary treasures. Every region in Indonesia have their own types of rujak with distinct flavours. Here is a list of Indonesian traditional salads that you should try:

Aceh Besar has a special rujak called rujak u groeh. While other kinds of rujak mostly consist of sliced fruits, this Acehnese rujak is made from soft shell of young coconuts. The part is mushy yet crunchy when you chew it. Rujak u groeh is seasoned with a mixture of brown sugar, chili, bread flour, and lime juice. 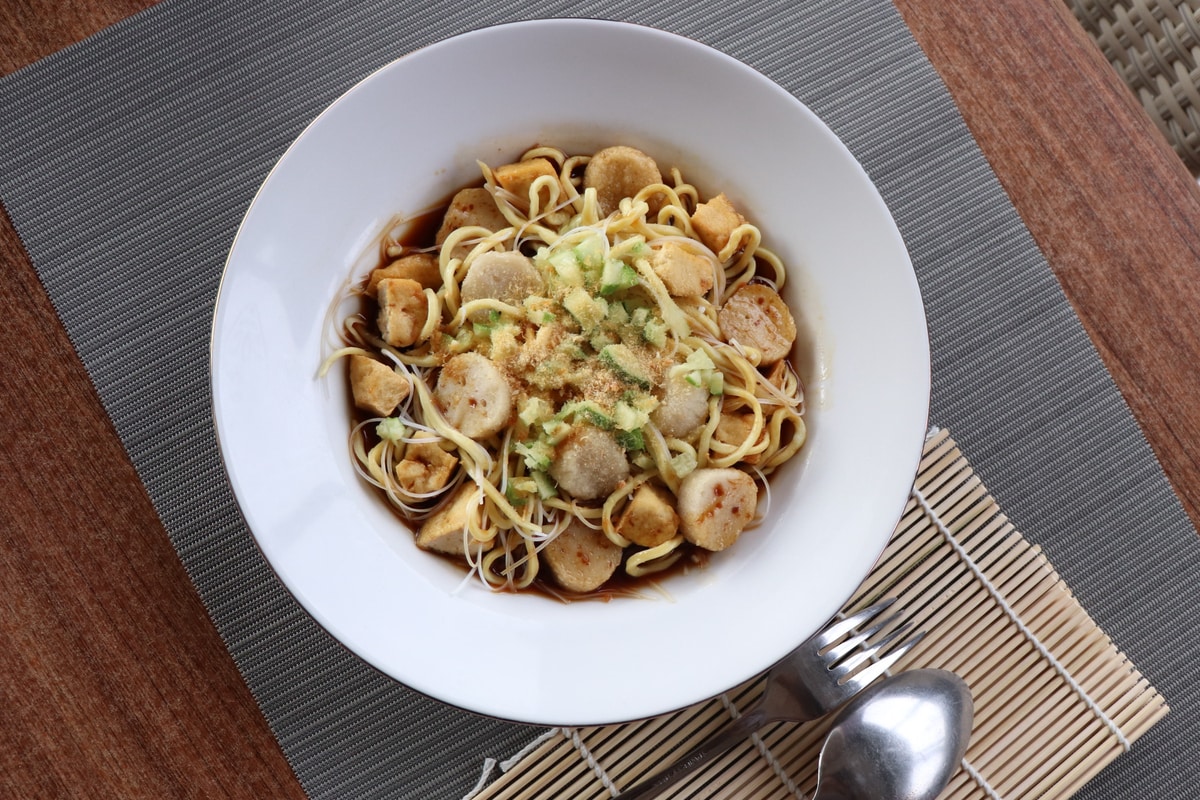 Another unique rujak comes from Palembang. The region is actually famous for its fish cake, called pempek, and that is exactly what Palembang natives use for their rujak mie. Like its name “mie”, which literally means noodles, the ingredients of the Palembangnese rujak are pempek, and of course, a lot of noodles. This rujak contains yellow or white noodles, pempek, and cucumber with spicy-savory-sweet local cuko sauce.

Indonesia’s capital, Jakarta, also has rujak with noodle, namely rujak juhi. Yet, the star of this traditional dish is not the noodle, instead, it is the juhi or baked dried cuttlefish. In this rujak, juhi is combined with yellow noodles, cucumber slices, lettuce or cabbage, and potatoes served with peanut sauce. It tastes much better with noodle crackers or chips! People in Yogyakarta like to put ice cream into their rujak,  thus, there is rujak es krim or ice cream rujak in this special region. Rujak es krim contains  shredded fruits, such as pineapple, jicama, cucumber, hog plum. This fresh combination are then seasoned with chili sauce and finally topped with coconut-flavored local ice cream. Rujak es krim is a good choice to enjoy amid Yogyakarta’s hot weather! Let us move to Malang, East Java, and its rujak gobet. The Malangnese rujak contains various fruits, such as hog plum, jicama, green mango, pineapple, cucumber, sweet potato, and pomelo.  These fruits are then shredded and soaked in spicy-sweet-savory sauce. Meanwhile, in Surabaya, East Java, its rujak is unique because of “cingur”. If you do not know what that is, cingur is a muzzle of a cow snout which is boiled through a gradual increase of temperature so that the muzzle would become tender. Although it may sound bizzare, rujak cingur is one of most-hunted traditional dish in Surabaya. Apart from cingur, the local salad also consists of fruits and vegetables, like cucumber, jicama, bean sprouts, water spinach, and beans. They all are then completed with some pours of savory peanut sauce. If you like soups, you might like rujak soto in Banyuwangi, East Java. It consists of boiled vegetables, such as water spinach and bean sprouts, mixed with a special sauce. The sauce itself is made from crushed peanut, brown sugar, and petis or shrimp paste. They are  then placed in a bowl and poured with a savory and warm soup. However, like any other East Javanese-style rujak, this Banyuwangi rujak also includes cingur. Rujak petis can be found as local dishes in many parts in East Java. It contains  fruits and vegetables usually found in rujak cingur. Yet, the rujak petis does not contain cingur but tempeh and tofu. What makes this rujak unique is the shrimp paste sauce or petis with peanut sauce. Whenever you go to Bali, what food will you choose for lunch: nasi jinggo, sate lilit, or ayam betutu? But, have you tried rujak kuah pindang? It is actually an interesting dish with a particular sensation of fresh fish. Rujak kuah pindang might look usual with various fruit slices, such as green mango, papaya, pomelo, and hog plum. Yet, it isn’t if you enjoy the fruits with its sauce, namely kuah pindang. The special sauce offers a unique fishy sensation because it is made from fish-head boiled water with some savory and spicy sauces. The Island of Gods also has rujak made from green seaweed and black eyed-peas. The green seaweed is boiled and then mixed with grated coconut. Meanwhile, the sauce is made from kuah pindang seasoned with shrimp paste, lime, chili, and salt. This rujak eventually tastes spicy, savory, and fresh! 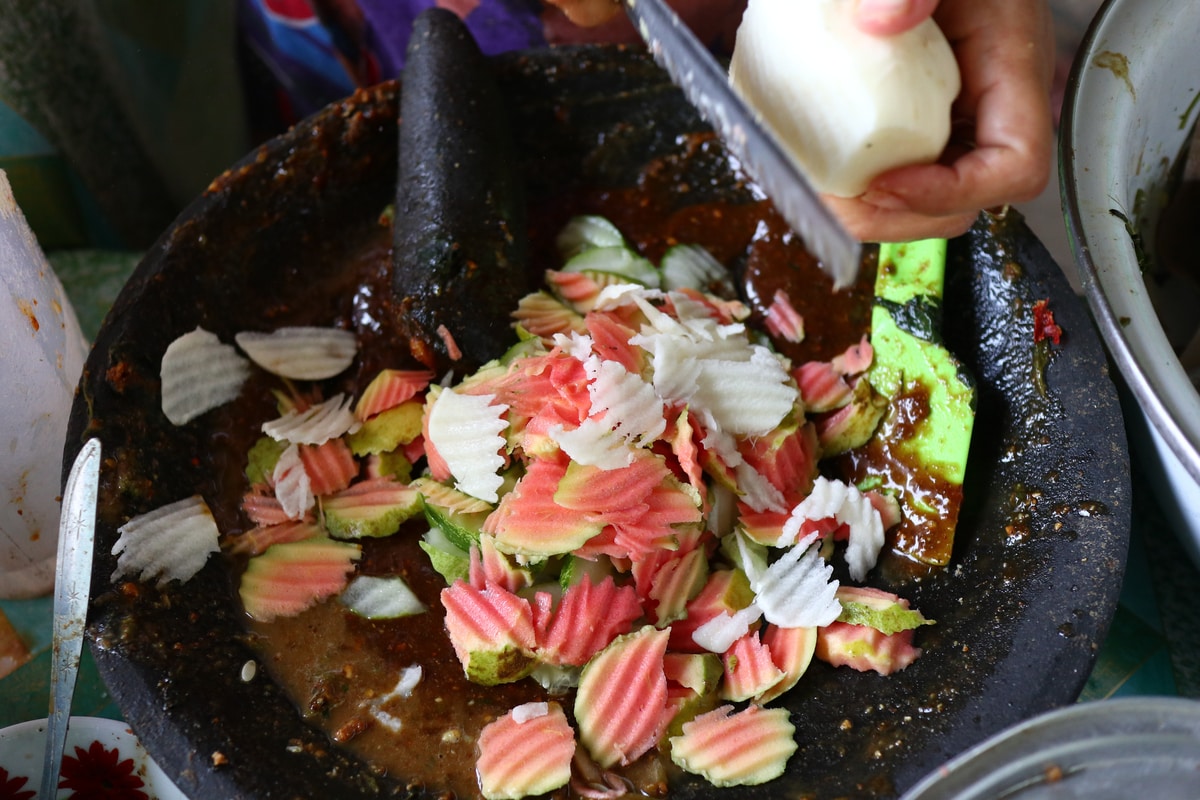 Sailing a bit from Bali, you will find another holiday heaven in Lombok, and of course, its special rujak, namely rujak terasi. While in East Java, shrimp paste is known as petis, Lomboknese – and most people in Indonesia – know it as terasi. The terasi is made into the red sauce as it is mixed with bird’s eye chili. This red sauce is then combined with gravy from brown sugar and poured into a mix of various fresh fruit slices. 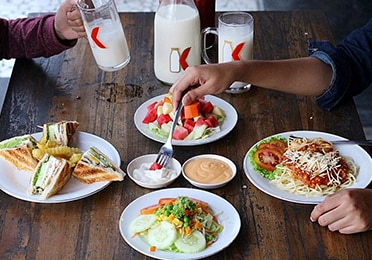 22 Great Spots for Your Summer Fun, Food and Friends in Yogyakarta