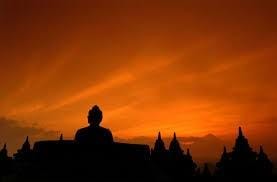 Celebrating Buddhism’s most holy event on Vesak 2560/2561, thousands of Buddhists from Indonesia and across the region will congregate at the magnificent Borobudur Temple in Central Java to take part in the series of rituals and ceremonies which this year will takes place from 19 – 22 May 2015. While, the pinnacle of the ceremony will occur at 04.14.06  hrs. West Indonesia Time on 22 May 2016.

The event is preceded by a rite to obtain holy water from the pristine springs at Jumprit in the Temanggung district, on 20thMay 2016. On the same day, this ritual will be followed by igniting the Vesak torch whose flames are taken from the natural eternal flames at Mrapen in the village of Grobogan, in the Purwodadi district, Central Java. The flame and holy water will then be kept in the Mendut Temple to be paraded and used during the ceremony at Borobudur on the actual Vesak day.

On 21st May 2016 the ceremony will commence with prayers at the Mendut temple, then the gathering of pilgrims will walk to the Borobodur temple carrying the flame of eternal fire, the holy water and Buddhist symbols that had been carefully guarded in the Mendut temple, to place these on the main altar which had been set up on the west side of the Borobudur temple.

On 22nd May, the pinnacle of the Vesak ritual will commence at the Vihara Githa. Devotees will then continue with pradaksina or the ritual of prayers circling three times around the Borobudur temple, moving clockwise from east to west. An integral part of the ritual is the lighting up of candles and chanting of the Ghata Visaka Puja by the congregation. Nearing the final second of this year’s Vesak moment all devotees will meditate in deep spirituality followed by blessings given by the Mahathera Bhikkhu and Mahasthavira Bhiksu.

This year, the Vesak ritual ceremony will also be highlighted with 2 special pre-events. These are first,  the Borobudur International Buddhist Conference which will be held at the Concourse of Borobudur Park on 19th May 2016.

On this occasion, the management of Borobudur, Prambanan, and Ratu Boko Palace also invite those who wish to have the full experience of the Vesak ceremony for the Pre-Vesak event 2016 “PILGRIMAGE TOUR” on 20th May 2016. Starting with a sunrise prayer at the Borobudur Temple led by Bhikkhu Sri Pannyavaro Mahathera (Head of Mendut Buddhist Monastery), the pilgrimage will continue to the Mendut Temple, the Sewu Temple, Plaosan Temple, and Kalasan Temple.