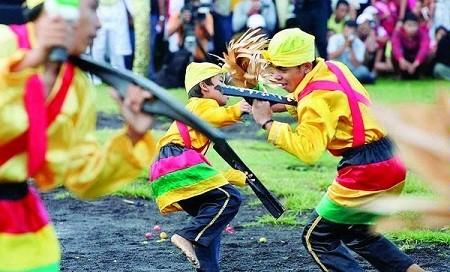 The Regional Government of Ternate together with the Sultan of Ternate will stage the Legu Gam Festival on 1st to 14 March 2016, to beheld earlier this year in conjunction with the total solar eclipse, which will occur on 9 March 2016. To date hundreds of people from around the world have already booked to come to Ternate, being one of the places in Indonesia where the eclipse can be viewed the longest. In this context, therefore, the local government plans at the same time to show visitors the best of culture and tradition that this region has to offer.

The festival used to be held annually in April to celebrate the birthday of the late Sultan of Ternate, Mudhafar Sjah. The occasion is filled with cultural performances, and a folk fiesta where are sold a wide variety of handicrafts and culinary treats specific to Ternate.

At Legu Gam, visitors will enjoy watching the arts and culture of North Maluku, with highlight the traditional procession in which the Sultanand his spouse would ride from the palace to the central Ngara Lamo Field. Meantime, booths of local businesses and community organizations enliven the Selero Square in the city of Ternate.

The Sultan then has to perform three important rituals, which are: the Doru Gam, Kololii Kie and Fere Kie. Doru Gam is where the Sultan visits specific places, while Kololii Kie is the procession where the Sultan sets sail around Mount Gamalama by boat; whereas, Fere Kie isthe ritual when the Sultan climbs Mount Gamalama. Having completed these three obligations, the Sultan will be entertained with traditional dances. Since the last Sultan of Ternate passed away in February 2015, his family are now the ones to continue perform the rituals together with the local communities.

The Legu Gam Festival is one of the largest and most important celebrations on Ternate, in the North Maluku province. This festival is a folk festival, where the royal family of the Sultan mingle with the population celebrating the birthday of the Sultan.

The small island of Ternate off the west coast of Halmahera was once ruled by the Sultanate of Ternate which grew into a powerful kingdom through wealth obtained from its abundant cloves and nutmegs.  Today the original palace still stands and is the home of the royal family.

Ternate is a city on the island of the same name, covering an area of 5681.30 square kilometers. It lies just at the foothill of Mount Gamalama. The region of Ternate itself counts five active volcanic inhabited islands with three uninhabited islands. The mountainous landscape, the volcanoes and transparent blue seas with colorful underwater life make this a beautiful destination.

Visitors who come to Ternate with the purpose to watch the Sun eclipse should not miss its most scenic surroundings, the hospitality of the people and their unique culture, then dive and enjoy the beautiful reefs teeming with colorful tropical fish.