Closing the month-long Independence Day celebrations in August throughout the nation, the Independence Day Carnival as pinnacle of festivities was this year staged on Saturday, 26 August in the cool mountain city of Bandung, West Java, to enthusiastic packed crowds along its 5 km route. Taking the theme National Unity in Diversity set in the Charming Land of Parahiangan (the Land of the Sundanese), the Carnival brought together a plethora of cultural presentations from around the archipelago set together with cultural performances from the green and fertile land of host West Java itself. 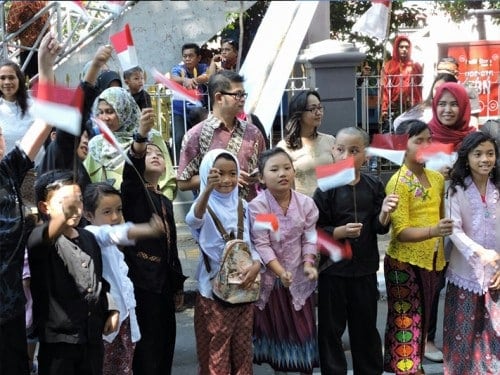 The excitement of the Independence Day carnival was already felt days before the spectacular event. For this special occasion Bandung was spruced up and gaily decorated with the Indonesian red and white flags and other ornaments across major streets to be passed by the parade. Meanwhile, among communities, preparations and coordination were intensely made by local authorities down to the neighborhood level, all in real high anticipation of hosting this most significant national event: Bandung city and its inhabitants were ready for a city-wide fiesta. And sure enough, on 26th August 2017, excitement engulfed the entire city. Men and women, young and old, locals and tourists, and virtually everyone flocked to bag the best place to watch the carnival along the route.

The Carnival started at West Java's Governor Office known as the iconic Gedung Sate, then on to Vanda City Park and the City Hall of Bandung, to finally reach the Alun-alun or Bandung Grand Square area where the entertainment stage was set up. Not only here but all along the route people packed the streets passed by the Carnival in the heart of Bandung, from Jalan Ir.H. Juanda Street (Dago area), along jalan Merdeka, Asia-Afrika Street, to the grand square. 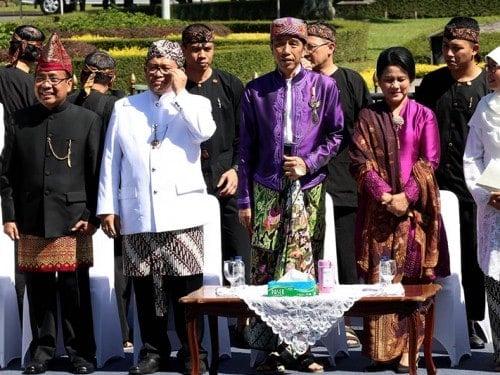 On this day not only were those participating in the parade specially dressed up, but spectators themselves came all dressed up in their finest traditional outfits, thereby merging performers with onlookers, together celebrating Indonesia's Independence across the archipelago within Unity in Diversity. Although most wore West Java's Sundanese ethnic traditional Pangsi costume for the men and Kebaya dresses for the ladies, among them, there were also people wearing traditional costumes from many parts of the archipelago.

After a series of official ceremonies held at Gedung Sate, the Carnival began its procession at 14.20 Western Indonesia Time. It was none other than the President of the Republic Indonesia , Joko Widodo and First Lady Iriana Joko Widodo dressed in purple in West Javanese traditional costume, who led the Carnival in a specially created float named Pancasila (The Five Principles of Nation) and Bhinneka Tunggal Ika (Unity in Diversity), the principles on which the Indonesian nation is founded. 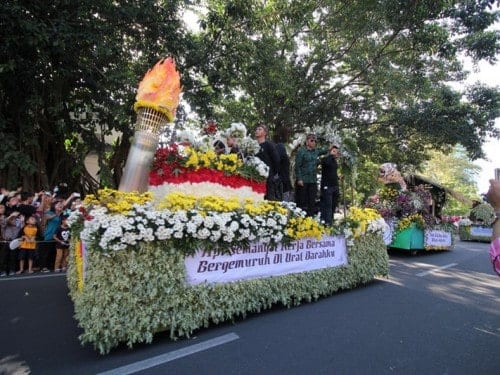 Accompanying in the float were Governor of West Java Province, Ahmad Heryawan, and Mayor of Bandung, Ridwan Kamil and a number of Cabinet Ministers including Tourism Minister, Arief Yahya, Minister of the State Secretariat, Pratikno; Minister of Housing Basuki Hadimuljono, Minister of Communication and Information Technology, Rudiantara, and Head of the Creative Economy Bureau, Triawan Munaf. The stream of decorated floats, marching bands, and performers made its way through the major streets of Bandung cheered on by the sea of thousands of excited crowds. Pure enthusiasm was in the air. From the top of his float President Jokowi, as he is better known, and Ibu Iriana threw hundreds of tourism T-shirts to the crowds creating even more hilarity. 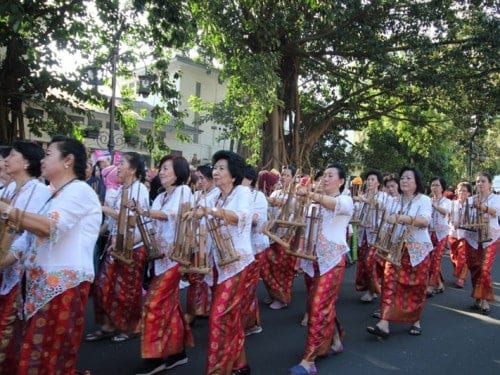 Presenting cultural wonders across the archipelago as well as the exquisite merger of a grand carnival at the same time the excitement of a folk fiesta, there is only one word to describe this special carnival: simply spectacular. Colorful floats of various unique shapes and sizes; the marching bands parade; the horses in the cavalry parade; the horse-drawn traditional carriages; the specially brought presentation from The fantastic Jember Fashion Carnaval in East Java and the flower floats from the Tomohon Flower Festival in North Sulawesi, the Banyuwangi ethno carnival, amazing traditional costumes, dances, and music from all across the archipelago; followed by presentations from unique communities such as the BMX action bikes, antique bicycles, modern 'cosplays', traditional umbrella parades; and a whole lot more, all truly contributed to make this the ultimate carnival of the year. 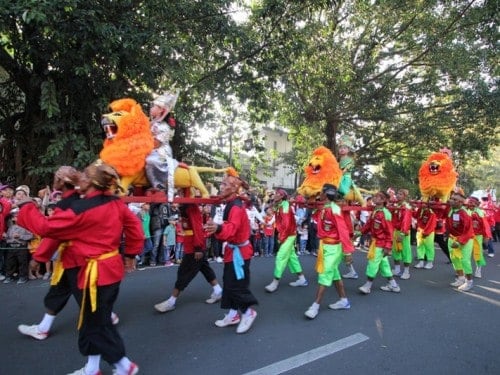 From Aceh Province at the western end of Indonesia and Papua Province at the eastern end of the country, the carnival featured some of the most iconic traditional cultural attractions, among which, the Reog Ponorogo of East Java, Ondel-ondel giant puppets from Jakarta,the Kabasaran Dance of North Sulawesi, and plenty more.

As host of "The Charm of Parahiangan", special highlight was given to cultural traditions of West Java. These included the art of Sisingaan (Lion Dance), KudaRenggong (Dancing Horses), Pangandaran's traditional Ronggeng Gunung Dance, traditional Angklung musical ensembles, Bebegig Sawah (traditional Sundanese Scarecrows), and lots of others. Having followed 2.2 KM of the route from Gedung Sate on, President Joko Widodo and First Lady Iriana, stepped down from the float at Vanda Park to personally greet the crowds and watch the rest of the carnival from here, while the procession wend its way to the Alun-alun or the grand square of Bandung. In total the route covered a distance of 5.2km. 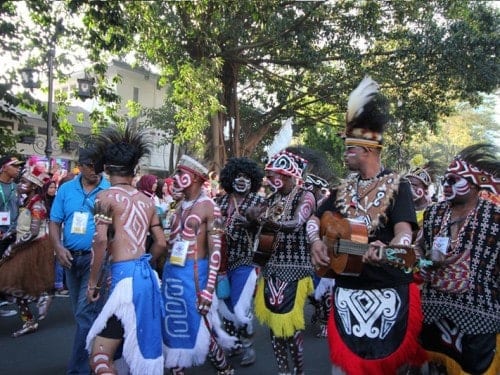 If before, the Independence Carnival was usually held in front of the Merdeka Palace in Jakarta, however, since 2015, President Jokowi initiated to have this event held in different provinces taking turns, starting in Pontianak, capital of West Kalimantan Province, followed in 2016 at Lake Toba, in North Sumatra and this year in Bandung, West Java.

Every year the Independence Day Carnival continues to be a hallmark in the series of events in Indonesia's Independence Day Commemoration. Not only does it commemorate the historic milestone in Indonesia's history, - Indonesia's Proclamation of Independence on 17 August 1945 - the event also successfully shows to the world that carrying the spirit of "Bhinneka Tunggal Ika" or Unity in Diversity, the different cultures and traditions of Indonesia are indeed the very foundation that strengthen its unity. For those who wish to witness Indonesia's fascinating cultures in a short time, this event is surely the best occasion that you can experience in a nutshell.

2. The bewitching Chinatown of Bandung: An Oriental Touch in the City of Flowers

4. 8 Amazing Back to Nature Cafes in Bandung