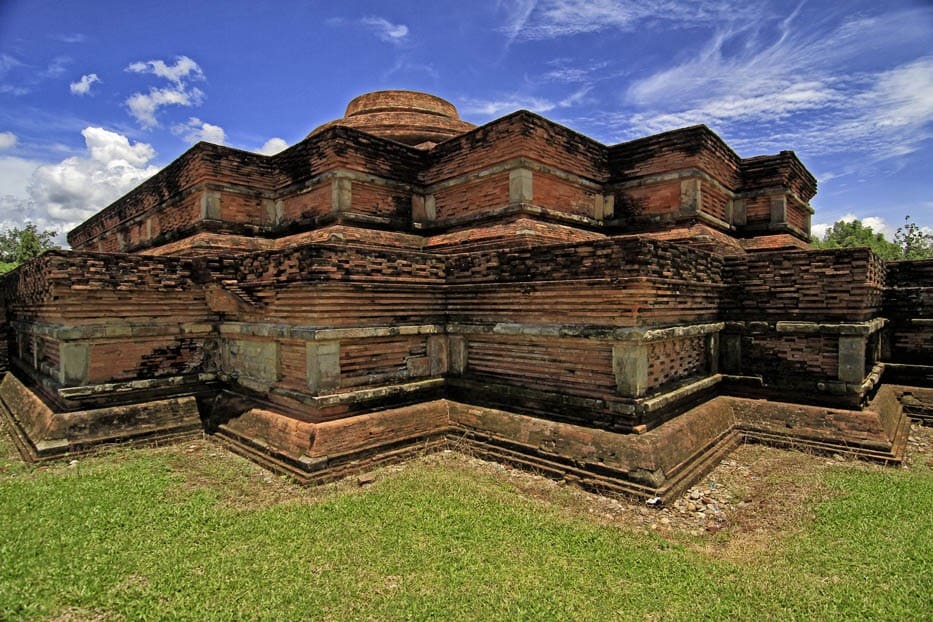 Located some 122 from Pekanbaru, capital of the province of Riau, the Muara Takus temple complex (or Candi Muara Takus) is built by the Kampar Kanan river. Muara Takus has the largest brick buildings on Sumatra found remotely in a jungle clearing. The main Candi Mahligai is a tall stupa flanked by ruins of several other brick sanctuaries. Its tall shape differs from the normally bell-shaped Buddhist stupas found on Java. The temple is constructed of river boulders, sandstone and earthen bricks and was restored in 1980.

Within the walls are found the Candi Tua, Candi Bungsu, the Mahligai stupa and the Palangka. In the complex is also found a mound believed to be the place for cremations. It is, however, known that during the 10th century, the kingdom of Crivijaya located further south near present-day Palembang was a thriving learning center for Buddhism, where even Chinese pilgrims were said to study on Sumatra first before proceeding to India.

It is said that the Muara Takus bricks were made in the village of Ponkai above the temple complex, where inhabitants carried the bricks, handing these over to one another in a long line all the way to the complex. This means that the temples were built jointly with the inhabitants. The Muara Takus complex is the only temple complex found in Riau, evidence that Buddhism had spread here during the early centuries.

Muara Takus can be reached by road either from Padang, West Sumatra or from Pekanbaru, Riau.