Less than an hour's ferry ride from Singapore and Johore Bahru in Malaysia, the charms of Bintan Island in the Riau Islands Province, are steadily attracting more and more tourists not only from the ASEAN countries but also from across the world. Most tourists head straight to the Bintan Resorts in the north of the island, but as a matter of fact, Bintan offers some gems that are worthwhile to explore. You can take the day tour around the island, or explore yourself the exciting life of people living on these hundreds of islands.

Having once been a busy trading port, Bintan island was once part of the influential Johore-Riau-Lingga kingdom which was later split apart by the Treaty between the Dutch and British colonial powers. Before that, Marco Polo during his travels in the Orient also seemed to have called on Penyengat Island by Bintan.

Therefore, visiting Bintan will not be complete without visiting the areas where you can meet the local population and experience some local life:

So, among the many others, here are 6 gems for you to further explore Bintan Island:

1 | A Cultural Trove on Penyengat Island 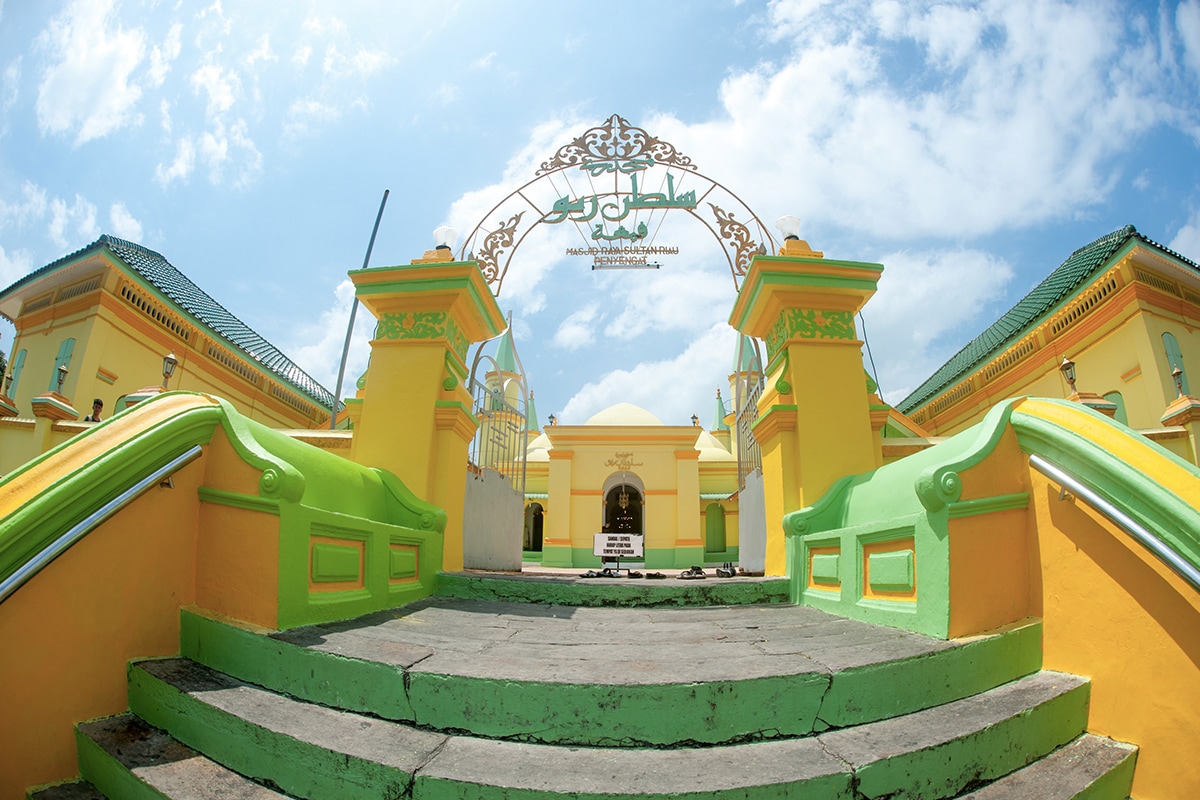 The island of Penyengat - a small island located just opposite Tanjung Pinang, today's capital of the Riau Islands province, - is where some important history took place. This was once the twin-seat of the 18th century Johore-Riau kingdom. Today, royal descendants of the dynasty still live here.

Hop on a traditional boat from the harbor of Tanjung Pinang and head to Penyengat Island, and you will be transported back in time to the golden age of this sultanate. From afar the royal mosque of the island stands out regally adorned with its distinct yellow and green colors. Nearby are ruins of an old palace, where rusting cannons that once defended the island against Dutch invaders still cast their glance over the sea while the sounds of a bygone era still echo in the wind. There are also a number of royal graves here. The legacies of the great sultanate on the island are not only carved in heritage structures but are more distinctly immortalized in the highly treasured literary works found on the island known as Gurindam Dua Belas (The Twelve Gurindam). Today's Bahasa Indonesia, the national language across Indonesia, has its source in the literary language rooted in Penyengat.

The island with all its attractions is being listed as UNESCO World Heritage Site pending inscription. It is small wonder, therefore, that TripAdvisor has awarded the Penyengat Island a ‘Certificate of Excellence'. Only recently opened in February 2017, the Vihara Ksitigarbha Bodhisattva or also known as the 500 Lohan Temple is a truly magnificent site. Situated about 10Km west from the heart of Tanjung Pinang, the Buddhist temple features an impressive 500 life-size sculptures of Lohan/Luohan, otherwise known as Arhat, the term used for souls who have attained nirvana or those who have far advanced up the path to Enlightenment. Each of the 500 sculptures is extremely lifelike capturing characteristics, facial features, and postures of the lohans. There is a sense of orderly formation and movement at the same time. This fascinating sight is definitely every photographer's wonderland.

3 | The Grotto of the Virgin Mary It may come as a surprise to discover how in this predominantly Muslim island you will suddenly find a Grotto dedicated to the Virgin Mary. Located by the long Trikora Beach and secluded from the main road is a small Catholic Church, with further behind it a grotto with the statue of the Virgin Mary similar to the one in Lourdes. Here the grotto is surrounded by beautifully flowering bougainvilleas, providing that peaceful ambiance to passers-by to pray and meditate. Additionally nearby is also the Way of the Cross with the 14 stations of devotion following the sufferings on the last day of Jesus Christ who died on the Cross.

The guide will tell you that the grotto and church were built by Vietnamese refugees who at the time fled to Bintan and Batam to escape atrocities that were happening in their homeland. On the island of Galang close to the nearby island of Batam and connected by a long bridge are remnants of the Vietnam Refugee Camp, which has long been deserted but is now kept as a living museum. 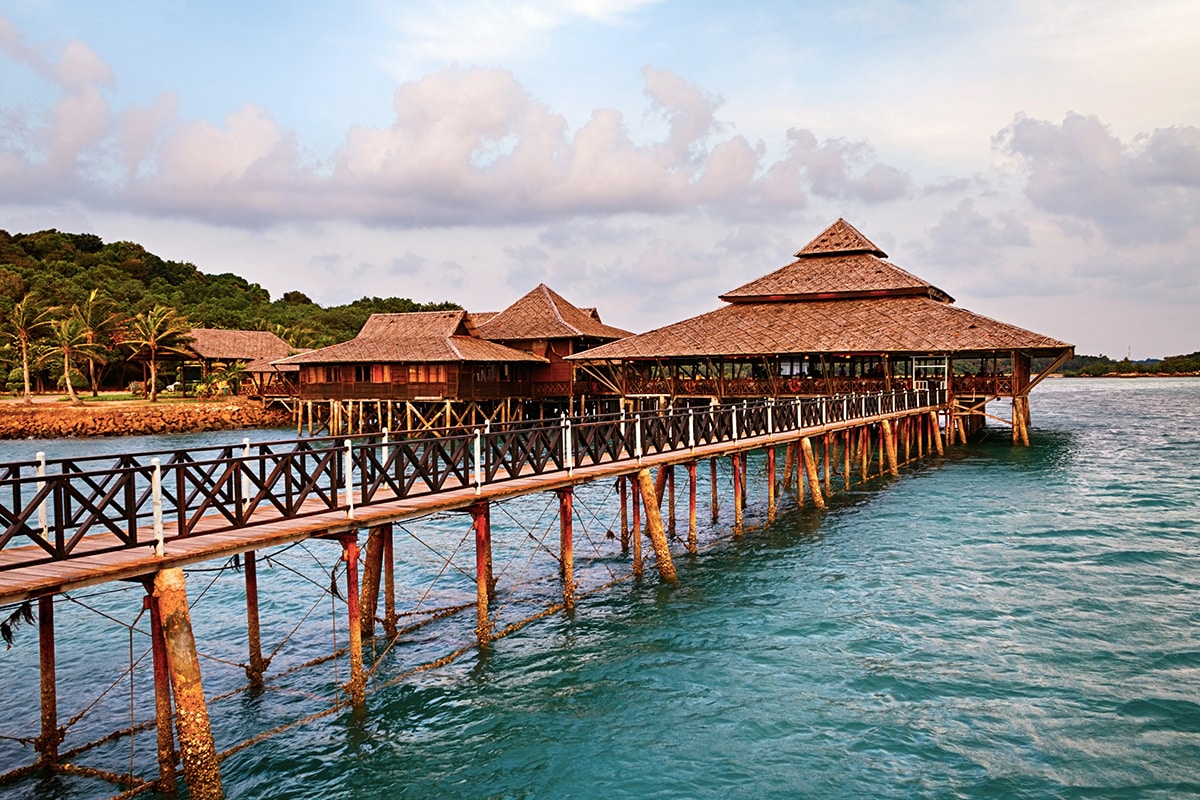 When you cruise around Bintan Island, you will notice wooden houses built on stilts off shore above the sea. Some kelongs are favorite accommodation for avid anglers from Singapore. These houses are dwellings while some have now flourished as waterfront restaurants called ‘Kelong'. They harvest fresh seafood just under the floor and cook them according to your choice of menu. Although there are also ‘kelong-styled' restaurants in many resorts, you should try the many local Kelongs across the island and experience its authentic sensation. Come by in the afternoon, and wait for your dinner to be served while waiting for the romantic sunset skies. Bring cash, and do check first on the price, because the seafood is weighed first before it is cooked.

Although during the day, the wide jalan Potong Lembu Street in Tanjung Pinang only serves as a parking lot, but from sunset on the area is closed to traffic and comes busily alive to turn into what is locally known as ‘Akau' or food street with rows of food stalls offering various distinct Bintan's dishes as well as food and snacks from other areas. Even from afar you will be drawn by the different inviting yummy aromas of delicious dishes such as chili crabs, fish head curry, barbecued fish, fried rice or fried noodles and a whole lot more. Back north, located southwest of the extensive Bintan Resorts area, just at its very border, are pristine mangrove forests bisected by the meandering, clear river of Sungei Sebung. This 6.8 km long river has its source in the hillside lakes whose waters are collected from the rains and not from the ground as spring water. The mangrove forests that once used to be cut down by the locals to obtain wood for charcoal and building materials have now been left alone to return to their original state ever since tourism now promises a better future through the preservation of the forests and river: precisely the natural environment that tourists seek and love. Today, visitors can take a boat ride from Bintan Resort, going up almost right to the source of the river. Experience a thrilling trip into the world of tropical mangroves: watch monkeys, kingfishers, otters, tree snakes. When you take the boat around sunset, then in the dark you may encounter thousands of fireflies flying up and around creating glowing lights, sparkling up the bushes like Christmas trees. Boat trips to the Sungei Sebung mangrove forest can be arranged upon request. A Guide to an Unforgettable 24 Hours Bintan Experience 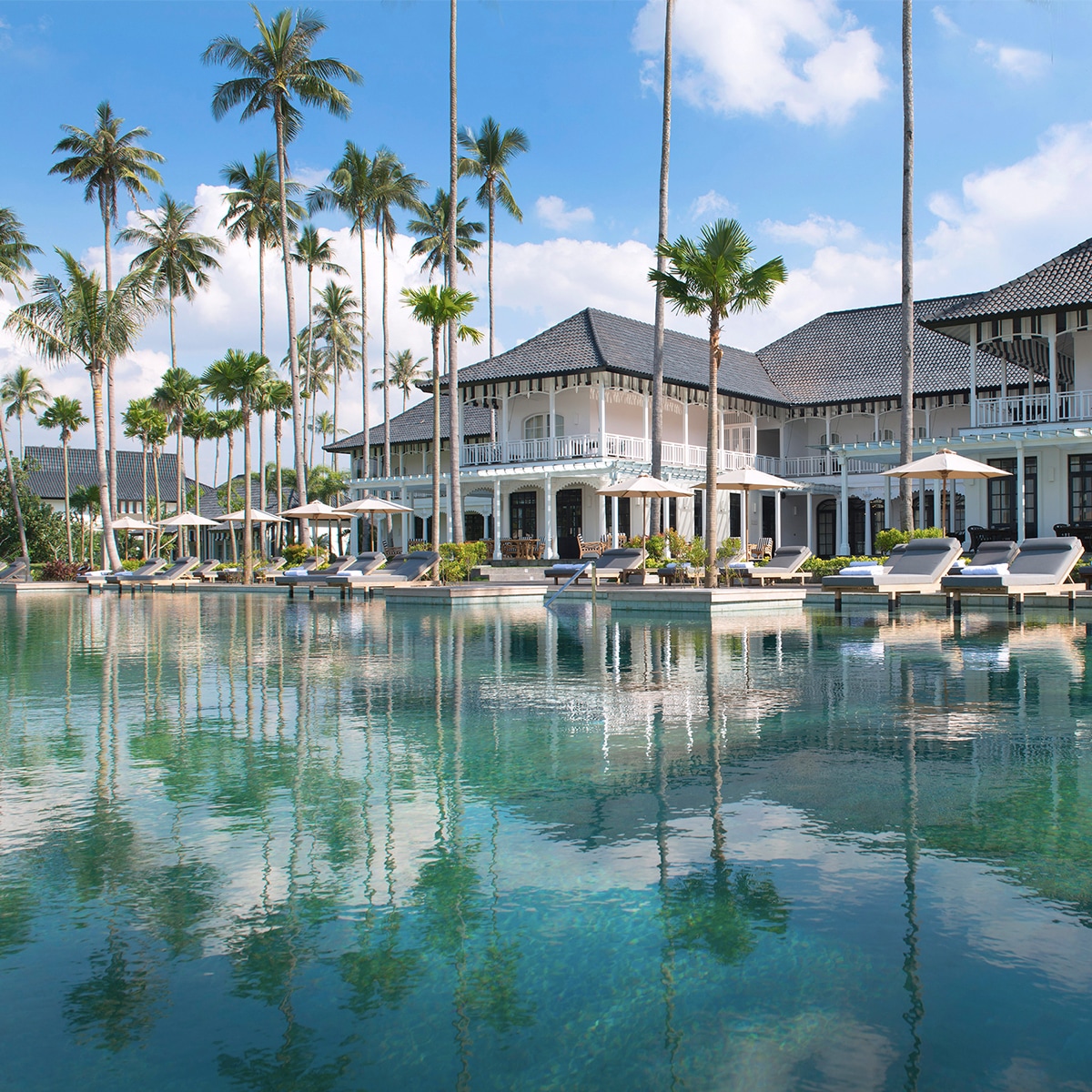 The Sanchaya - Intimate Bintan Resort for Your Staycation 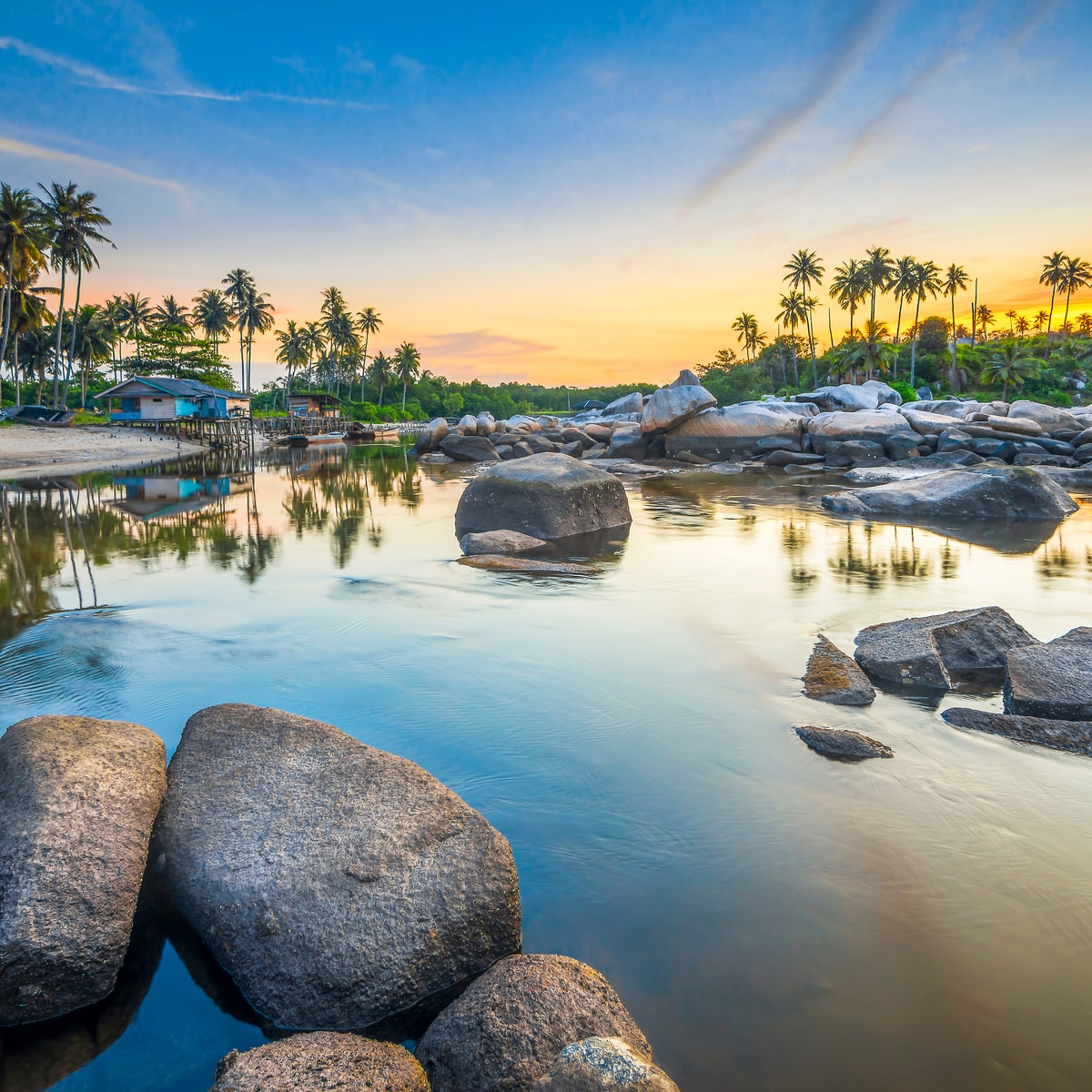 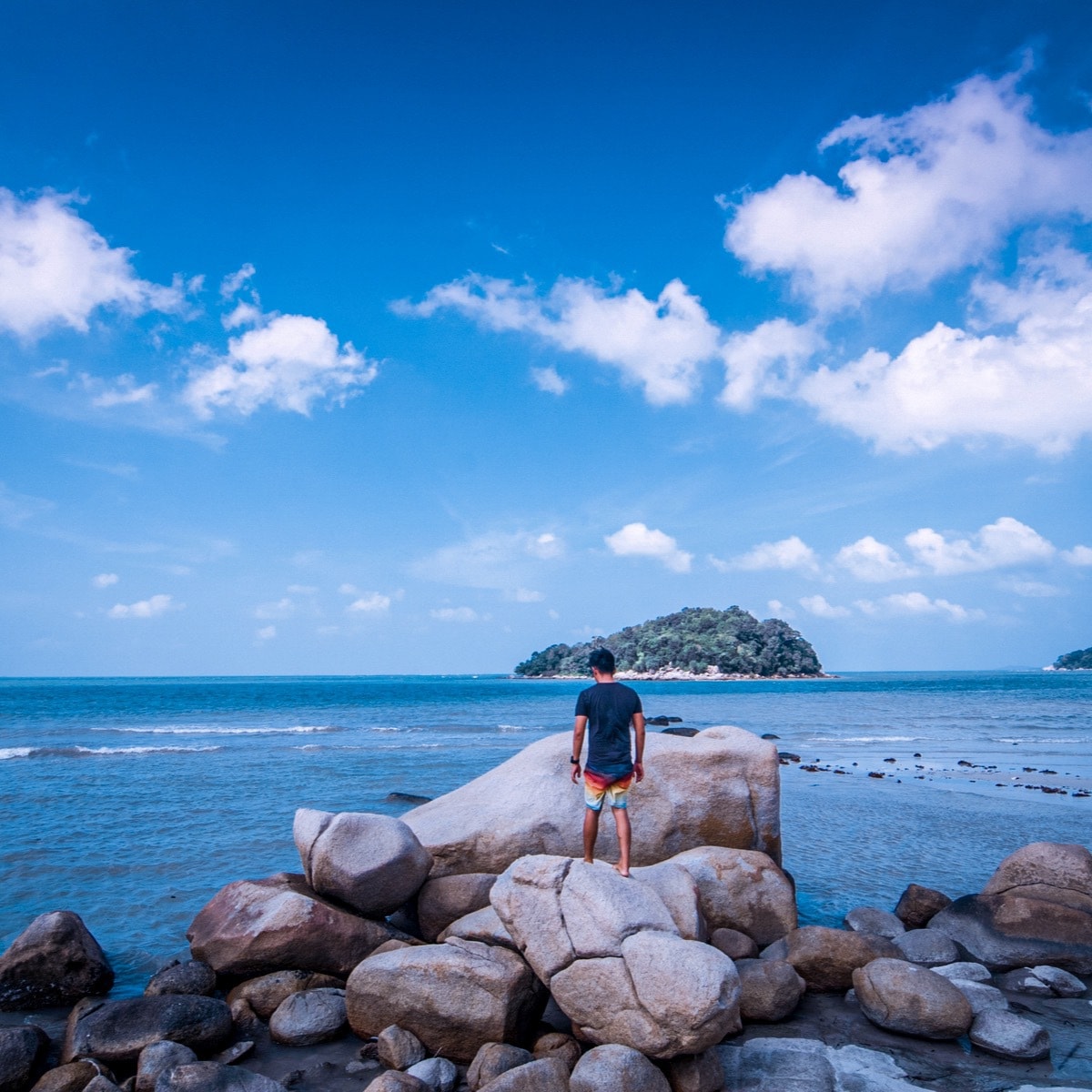 5 Ideas Where to Find Incredible Landscapes in Bintan