The Chinese believe that certain food brings good luck and prosperity. For example, noodles are believe to bring you longevity and happiness, while fish symbolizes prosperity. As the Chinese New Year coming in on the 16th of February, why not welcome the new lunar year with cuisines that will bring you and your family good fortune?

Though predominantly celebrated by Chinese descendants living in the country, the Lunar New Year or Imlek is also enjoyed by non-Chinese as well. The celebration of this special occasion is more vibrant in Chinatowns across the archipelago. Fantastic performances by the acrobatic Barongsai, red-gold lanterns, and good fortune cuisines mark the Imlek fanfare.

But did you know that in Indonesia there are special dishes that are served to commemorate the occasion? Below we have listed eight unique dishes that are made to celebrate the Chinese New Year in Indonesia. Each one signifies a special blessing for the upcoming year. Often served fried or braised, the Jumbo Milkfish is said to provide luck in business endeavors to those who consume it. The dish is prepared meticulously so that it does not ruin the shape of the fish. The whole fish dish is usually served with sweet and sour sauce. The meal is perfect for two to three people, and the added luck is a bonus. 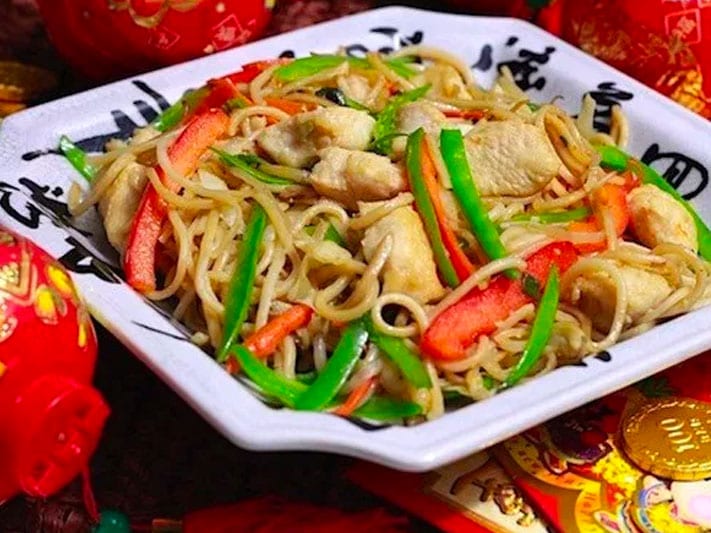 This noodle dish is found on the table of almost every Chinese households on the eve of the New Year. It is made of rice noodles that are sauteed in soy sauce with seafood and vegetables. The long strands of noodles represent longevity in life. Families will say a prayer and ask for blessings before consuming this traditional Chinese meal. The Tea Leaf Egg is considered a light snack, but it can accompany meals as well. It is a hardboiled egg, infused with black tea and spices that cause a marbling effect as well as a rather herbal flavor.  It is said that eating this egg during the New Year will bring fertility to those trying to conceive. 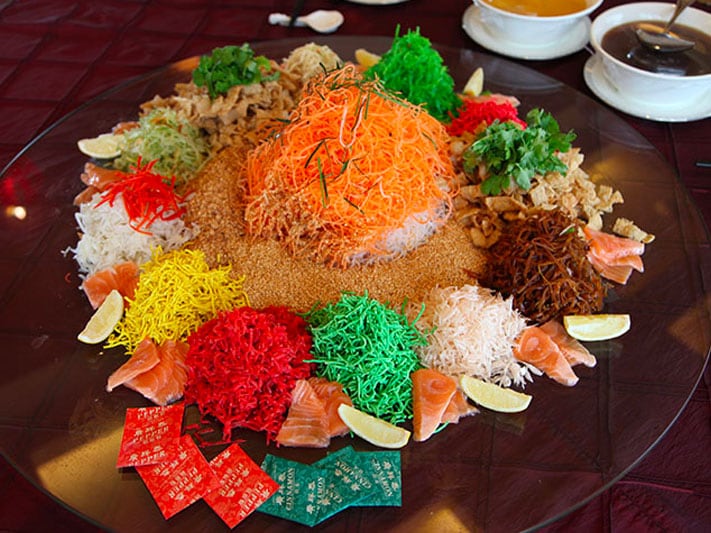 This dish is referred to as a prosperity salad. It is made with shredded vegetables -such as shredded radish, carrots, ginger and onion slices, and crushed peanuts-, raw fish, and to top it off, sweet vinegar is used to tie the flavor. The meal is good for your health and it is believed to bring good luck for the coming year, and therefore is a must have on the New Year. Made from glutinous rice, this sweet cake is also referred to as the Chinese New Year cake. The story goes that the texture of it is made to be sticky as it was once used to throw at the mouth of the Kitchen God to prevent him from opening his mouth and saying terrible things. The cake is sold all year around, but on Chinese New Year it is said to bring families together and strengthen their bond as well as stopping them from saying something terrible at the table. The Red Mangkok Cake is unique to Indonesian Chinese. It is made to celebrate the Chinese New Year traditions. The steamed cake resembles a cupcake, has a sweet taste and a bright red color. The top of the cake opens like a blooming flower. In Indonesia, it is a must have on Chinese New Year as it is supposed to bring good fortune towards the coming the year. Another Indonesian classic dessert inspired by the Dutch is the very beautiful layered cake called Lapis Legit. On Chinese New Year, the cake represents layers of wealth and prosperity. However, it is also used commonly for any occasion and for those looking to present this cake as a gift, it is socially acceptable during any Indonesian holiday as it is the nation's favorite! The number eight in the Chinese tradition is said to represent luck as it has similar sound ("ba") to the word fortune ("fa"). That is why the Prosperity Box is always divided into eight sections. Each section has sweet treats that hold various significance, but in all, it is meant to bring happiness and fortune to the family that acquires it.