Celebrating Buddhism’s most holy event on Vesak 2561/2562, thousands of Buddhists from Indonesia and across the region will congregate at the magnificent Borobudur Temple in Central Java to take part in the series of rituals and ceremonies which this year will take place from 9 – 11 May 2017. While, the pinnacle of the ceremony will occur during full moon on 11th May 2017.

Borobudur is a UNESCO World Heritage Monument and is recognized as the largest Buddhist temple in the world. Built around a hill, the temple is a marvel of design containing 504 statues of the Buddha and 2,672 relief panels. It is a mere one hour drive from the popular tourist city of Yogyakarta and is closer still from Central Java’s capital city, Semarang. From the top level of the monument you will experience a breath-taking sunrise over the green valleys below, that slowly lights up the shadows of stupas that surround each level of this magnificent temple. 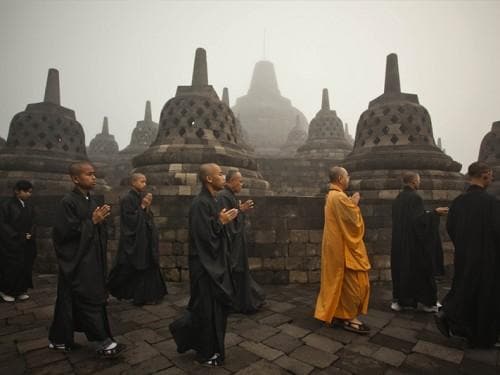 The event is preceded by a rite to obtain holy water from the pristine springs at Jumprit in the Temanggung district, on 9thMay 2017. On the same day, this ritual will be followed by igniting the Vesak torch whose flames are taken from the natural eternal flames at Mrapen in the village of Grobogan, in the Purwodadi district, Central Java. The flame and holy water will then be kept in the Mendut Temple to be paraded and used during the ceremony at Borobudur on the actual Vesak day celebrations. 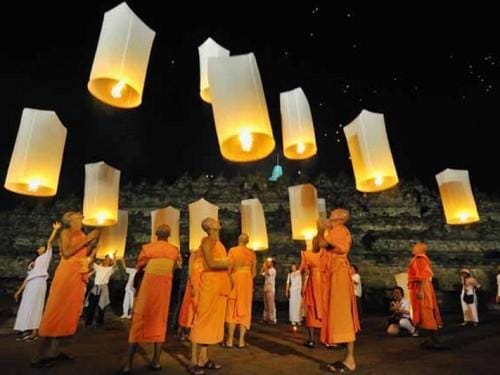 On 9th May 2017 the ceremony will commence with prayers at the Mendut temple, then the crowds of pilgrims will walk together to the Borobodur temple carrying the flame of eternal fire, the holy water and Buddhist symbols that had been carefully guarded in the Mendut temple, to place these on the main altar which had been set up on the west side of the Borobudur temple.

On 11th May, the pinnacle of the Vesak ritual will commence at the Vihara Githa. Devotees will then continue with pradaksina or the ritual of prayers circling three times around the Borobudur temple, moving clockwise from east to west. An integral part of the ritual is the lighting up of candles and chanting of the Ghata Visaka Puja by the congregation. Nearing the final second of this year’s Vesak moment all devotees will meditate in deep spirituality followed by blessings given by the Mahathera Bhikkhu and Mahasthavira Bhiksu. 1. Best Places to Get Close to Fresh Green Nature in Magelang

2. Central Java and Jogja Calendar of Events 2017: The Story of Java

5. Semarang Attractions not to be missed