Standing majestically on the eastern seaboard of Bali is the island’s highest mountain: Gunung Agung or Mount Agung, located in the district of Karangasem. With its summit reaching a height of 3,031 meters above sea level, Mt. Agung affects its surrounding climate. Its western slopes catch the rain clouds making the west side lush and fertile, while its eastern slopes remains dry and barren. 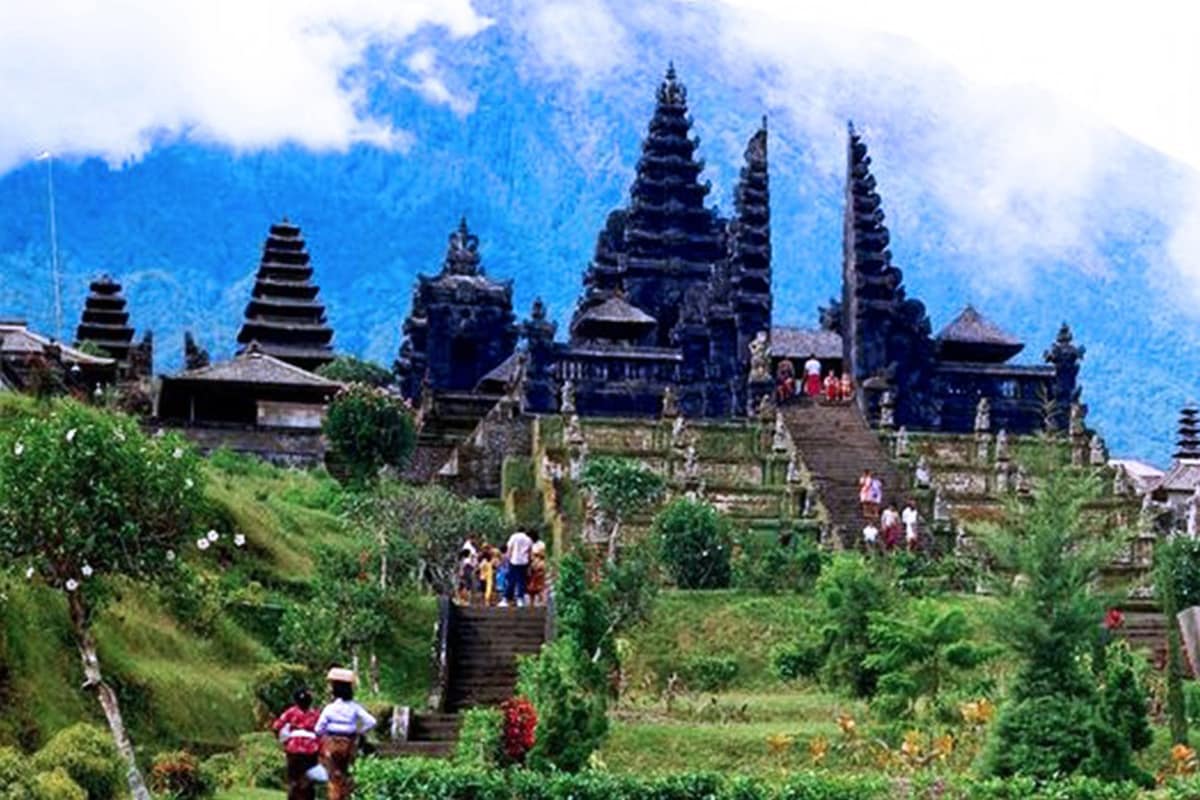 The Balinese believe that Mt. Agung is the abode of the gods, and the volcano therefore  is revered as sacred. It is on this mountain that the mother of all temples in Bali is located, called Pura Besakih. Entering the temple one has to climb hundreds of steps before reaching  the main gate.  But, fortunately, other staircases with easier climbs are available  to make it easier for women carrying high mountains of offerings on their head to reach the temple.

Best time to visit Besakih is at Galungan celebrations when the entire entrance and temple is beautifully decorated with tall bamboo poles,  coconut leaves and flowers, while hundreds of women in a neat row,  in their best white costume gracefully bear piles of colorful fruits and flowers offerings on their head. While,  commanding protectively in the background of the temple  looms Mt. Agung. This is indeed a spectacle never to be forgotten.

Although Mt. Agung inspires peace and tranquility, nonetheless,  after 100 years of slumber, on 17 March 1963 the volcano burst violently, spewing ash and volcanic materials  8 to 10 km high into the air while pyroclastic clouds rolled down all sides of the mountain. Over a thousand people perished that day. And the entire surrounding down to Kintamani was blanketed  for months in deep grey ash.  But surprisingly, the ash brought fertility and large sweet potatoes grew from the volcanic material. Today, however,  the landscape has turned green and fertile again, and  Mt. Agung has become a challenging mountain to climb.  There are two trails that trekkers may follow, the steepest  and toughtest being the trail right by Pura Besakih.

The second is along its southern peak starting from Pura Pasir Agung. Reaching the top one has a magnificent view on Bali with to its east the island of Lombok with its own volcanic peak of Mt. Rinjani.