Despite its frequent eruptions, Mt. Merapi is very central to the lives of the Javanese people and kings. For through its eruptions Merapi spews lava, ash and minerals to the surrounding areas. These provide nutrients to the soil, making this one of the most fertile areas in the world, and consequently the most densely populated.

This majestic, perfectly cone-shaped volcano, with its peak at 2,911 meters above sea level, has also determined the lives of kings and realms. In the early 11th Century, the once mighty ancient empire of Mataram mysteriously disappeared, and power suddenly shifted to East Java. Scientists surmise that a violent eruption of Merapi in 1006 AD was the ruin of the empire. 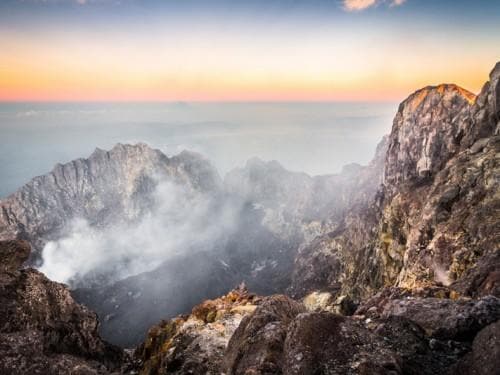 This massive eruption also buried the nearby Borobudur temple in ash. Most recently at the end of October-beginning November, Merapi erupted catastrophically killing 353 people mostly by its pyroclactic flows, the worst ever after the one in 1870. Local people respect the awesome power of this volcano. Annually, on the anniversary of the Sultan's coronation, offerings (labuhan) are brought from the Keraton of Yogya to Mt. Merapi, together with similar offerings carried to the Indian Ocean to the south, to appease the spirits of the mountain and the sea, in order to bring welfare to the inhabitants of Java. 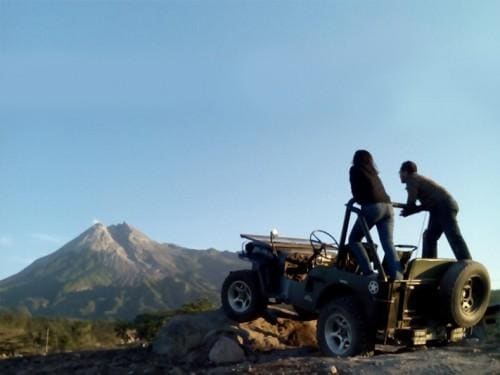 Today Merapi is continuously monitored by a number of earthquake posts,that warn inhabitants of imminent eruptions. Nonetheless, despite frequently giving out smoke, the mountain still attracts hikers and climbers and lately adventurers who love to retrace the hot lava flow of the last eruption, although now the lava has cooled down considerably.

Whether you are a professional or avid vulcanologist, or love the adventure of climbing or riding in off-road jeeps up dangerous slopes of Merapi, here are a number must do activities:

Your introduction to volcanoes is at the Museum Merapi. This Museum at Kaliurang, on the slopes of the volcano, is located some 25 km. North of Yogyakarta, and is dedicated to scientific studies of volcanoes, earthquakes and other natural disasters. It was unveiled for the public on October 1, 2009.

Occupying a land area of 3.4 hectares, the 4,470 square meters building consists of two floors. The first floor contains rooms with themes, such as: Volcano World, The Merapi Volcano Trail, Man and the Mountain of Fire, Earthquake and Tsunami, Disaster Movement of Soil, Diorama and Extra-terrestrial Volcanos.

Meanwhile, the second floor is used for the screening of images and films on Mount Merapi. It also highlights the National Personalities who have visited the victims during the last devastating eruption. At the west hal, is information about tremendous volcanic eruptions around the world. One of these was the Krakatau Eruption in 1883 that killed thousands, caused by pyroclactic cloutds and its ensuing tsunami, while its eruption darkened the skies for 3 days across Asia, US and Europe.

There are many spots established as viewing points overlooking the mighty Merapi. But your best vantage point is at Kaliurang's Observation Tower, located only 7 kilometers away from the crater, ensuring a relatively safe distance. There is an extensive garden surrounding the 2-storey tower, where you can linger in the cool air while sipping a warm Wedang Ronde – a warming ginger drink -to revitalize your energy.

You will find many Jeep communities at Kaliadem who can offer you an off-road adventure of the devastated area covered by ash and lava in the last eruption. The tour will always be led by professional drivers who double as guides. The rushing feel of adrenaline will keep in as your Jeep zig-zags over the trail.

3. Semarang Attractions not to be missed