Apart from the beautiful beaches and other tourism sites, Bali also has several tasty traditional cuisines. If you are a travel and culinary enthusiast and planning to make a visit to Bali, here are 10 traditional cuisines that you must try while in Bali. Don’t miss the opportunity to try some of them!

Betutu is a Balinese dish of steamed or roasted chicken or duck enriched in Betutu spice mix. This highly seasoned and spiced dish is very popular in Bali and Lombok. The spice mixtures of Betutu consist of shallots, garlic, turmeric, ginger, wild ginger, galangal, candlenuts, chili peppers, shrimp paste and peanuts, all finely ground using mortar and pestle. The mixture is then sautéed and applied to poultry. The Betutu’s tastes and ways of cooking are different according to regions in Bali.

Sate Lilit is a variant of satay from Balinese cuisine. It is made from minced pork, fish, chicken, beef or even turtle meat, which is then mixed with grated coconut, thick coconut milk, lemon juice, shallots, and pepper. The spiced minced meat is wound around bamboo, sugar cane or lemongrass sticks, it is then grilled on charcoal. The terms “lilit” means “to wrap around”, which corresponds to its making method of wrapping around rather than skewering the meat.

Babi Guling or Pig Roast in Bali is usually served with lawar and steamed rice. It is one of Bali’s most famed dishes. The pig is stuffed and infused with a spicy concoction, typically consisting turmeric, coriander seeds, lemongrass, black pepper and garlic, and traditionally spit-roasted. It is available at warungs where locals go for a quick lunch or dinner.

Lawar is a dish that is made from a mixture of vegetables, coconut and minced meat mixed with rich herbs and spices. It is commonly found in restaurants and warungs in Bali. Despite its rich vegetable mixture, lawar is not a vegetarian dish, since most often it is mixed with minced meat or even blood.

Rujak Bulung (Seaweed) is one of the top favorite dishes among the people of Bali. Finding Rujak Bulung won’t be too demanding as it can be easily found in plenty of stalls that sell local Balinese cuisine. Aside from having Rujak Bulung for its mouthwatering tang, the Balinese generally eat this dish when they’re experiencing nausea attributable to its ability to get rid of sickness and vomiting.

Tum Ayam is another popular Balinese dish that is cooked in the same method as Pepes Ikan (steamed fish) and Otak-otak. To prepare this dish, minced chicken is mixed together with flavorful spices and coconut milk, wrapped snugly in banana leaves, and the steamed it or grilled. This dish consist of mixtures of minced chicken, shallots, garlic, coconut milk, spice paste, chili, and peppercorn.

This one is a traditional dish that originated from Gianyar, Bali. Cooked with a mixture of rich spices and peppers makes this dish taste a little bit spicy. It suits you very well if you like hot and spicy foods. Served along with side dishes that include long beans, red beans, fresh jackfruit, eggplant, moringa leaves, and grated coconut!

Tipat Cantok is a common traditional Balinese food that can be found almost anywhere in Bali. It is made of mix steam vegetables (water lily, long beans, and bean sprout) with rice cake mixed with peanut sauce. Sometimes, we added sweet soy sauce on the top to add sweet taste to this dish. Tipat Cantok can be found on local small Balinese warungs but rarely be found on big restaurants.

Bubur Injin is Balinese black rice pudding. It is one of the famous Balinese desserts. It is very easy to make and also delectable to have. Made from black rice mix with the glutinous rice to obtain the smoothness consistency and texture, sweeten with palm sugar, and drench with coconut sauce. It is a very delightful dessert! Once you try it, you will ask for more and more.

Jaje Laklak is a Balinese delicacy made from rice flour. This cake is usually enjoyed with a cup of coffee, which compliments the whole taste. It has a distinctive light green or white color with a perforated surfaced garnished with shredded coconut on the top and smothered with brown sugar sauce. But sometimes the brown sugar is replaced with milk or other flavorings. Some are also served with black sticky rice.

Those are some of the Balinese traditional cuisines that you surely must try! When you take your vacation to this Island of the Gods, be sure that you taste these delicacies too! Make a happy trip and have a happy tummy! 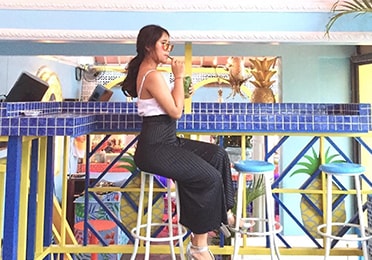 8 Appealing Activities You Must Try in Nusa Dua