Whenever Indonesians hear the word of Palembang, the top of mind is going to be the local food, Pempek. However, the city is actually ‘juicy’ not only because of the savory fish cake. The South Sumatra’s capital is also worth a visit due to its newly-renovated city corners.

Palembang will be the host of 2018 Asian Games and that people are dying to witness. Hence, the city has been upgraded; the riversides, neighborhoods, and pedestrian walks for the Asian Games enthusiasts. These places are boasted to be the city’s coolest spots for your stock photos or your Instagram update! Sekanak village is located in Kelurahan 7 Ilir IT I Palembang. It is located by the Musi River. This kampung is known as an old residential area occupied by the indigenous people of Palembang. Kampung Sekanak used to be the last bastion of the Sultanate of Palembang Darussalam against the attack from the Dutch army.

In addition to a fortress, during the Sultanate of Palembang Darussalam, Kampung Sekanak was once the residence of the nobles. Their houses are still to be found in the Sekanak area. In fact, the buildings were over 100 years old. Therefore, Kampung Sekanak is also often referred to as the old city of Palembang.

Since the end of last year, the Sekanak River area has been beautified and arranged into a mural village. The roads and buildings along the river has touch of colors that pamper our eyes. They were painted in various designs and patterns. The revitalization has not only eliminated the impression of a slum neighborhood but it also makes the area looks alive and attractive. 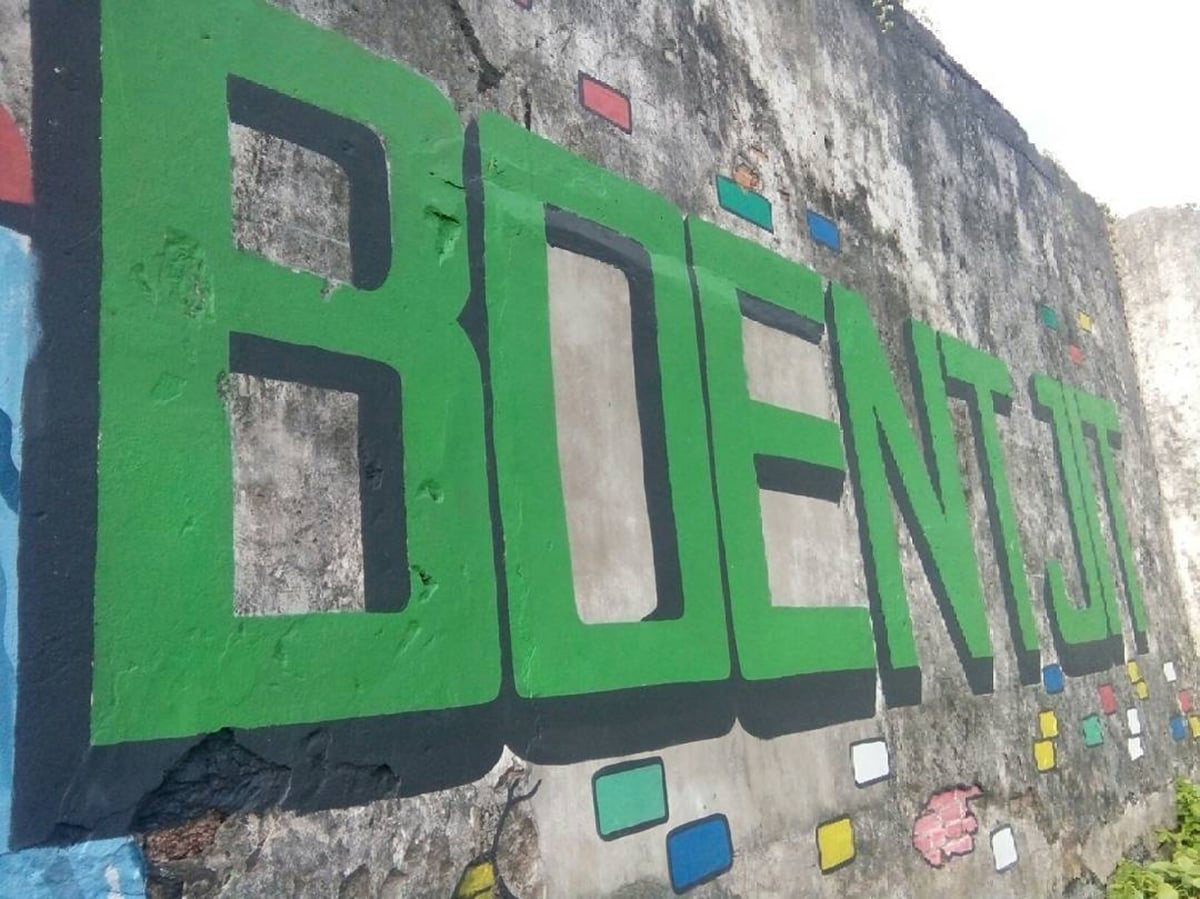 Gudang Buncit or Buncit warehouse lies within a complex known as Rumah Baba Boen Tjit. It used to be the residential compound of Palembang’s rich merchant in the olden days, named Baba Ong Boen Tjiet. According to the story in the community, the Chinese man built a large house on the banks of the Musi River so that ships from abroad could lean and moved goods easily to the warehouse.

The Ong Boen Tjit residential complex has now been developed into a tourist place called Baba Boen Tjit Market. It opens every weekend and offers a number of Palembang’s typical culinary such as pempek and and red bean ice.

Visitors are highly suggested to bring cameras whenever they visit the Baba Ong Boen Tjiet because aside from market, the area has also been turned into colorful spots. The Palembang's government has been teaming up with local artists to create murals in the Buncit warehouse. These creative people have worked on colorful drawings. Like crocodile head popping up from the wall, as well as the paintings of the 2018 Asian Games mascots Bhin Bhin, Atung and Kaka. Prior to the quadrennial sporting games, Palembang has made its new icon, called Tugu Belido. Tugu Belido is located in the plaza Kuto Besak Fortress (BKB) Palembang. The 12-meter monument is shaped in fish with silver color. This monument is set to tempt tourists with the fish muzzle that overlooks to the Musi River.

Belido is actually one of the endemic fish species in Musi waters or in other rivers in South Sumatra. It, however, has been increasingly rare. Thus, the Tugu Belido was established to assert the icon of the Musi River. 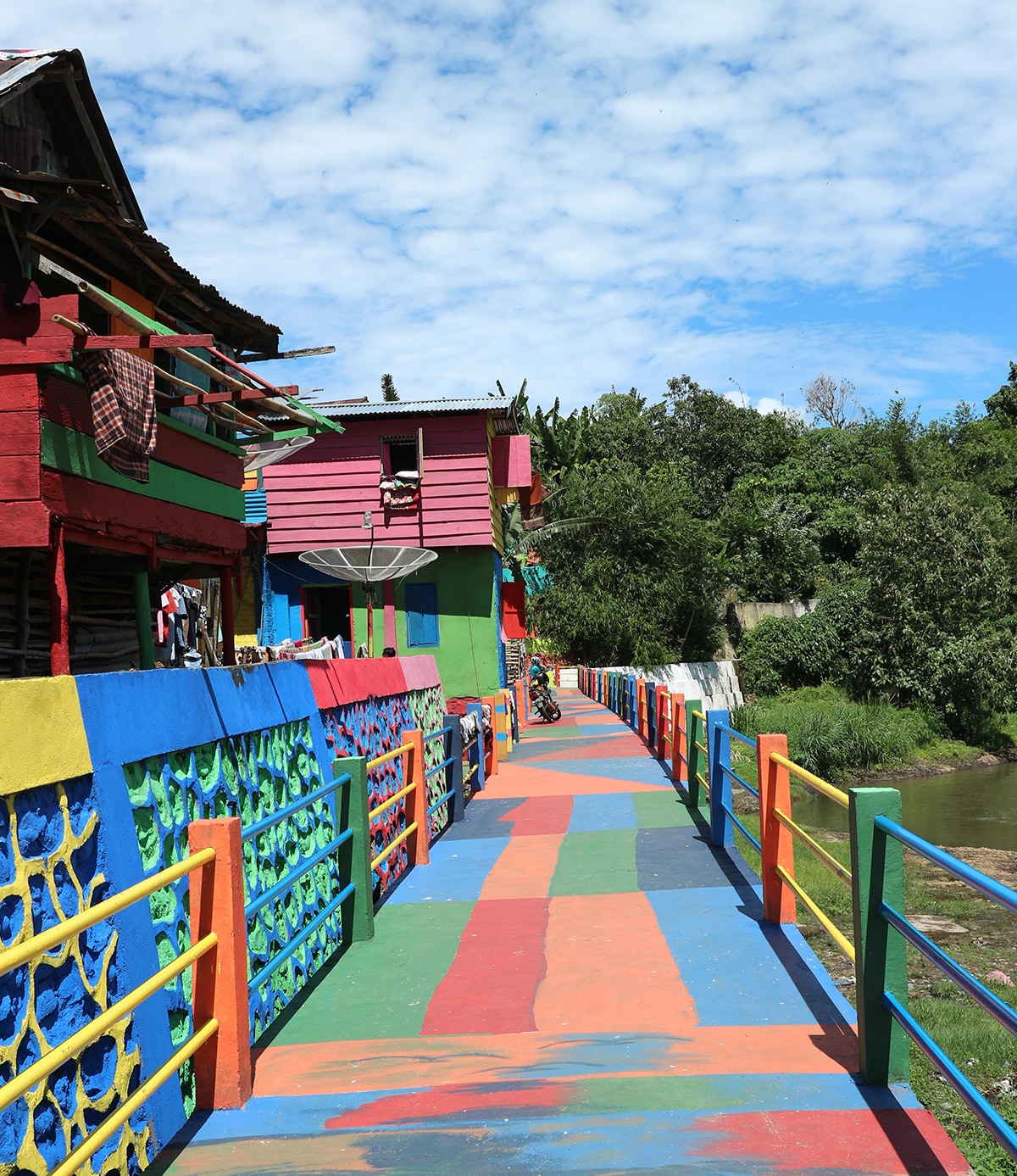 Colorful villages have become popular in a number of cities in the world. Palembang has joined the hype with Musi Bercorak. Approximately 1,000 buildings on the Musi riverbank are painted colorfully to attract tourists.

The painting has been made to an area as far as two kilometers. It starts from buildings under the Ampera Bridge to 7 Ulu area. The Colorful painting has also been put on several rafts that are also residents’ floating houses.

Previously, this place is a slum area. Thus, the beauty of the colors is expected to boost economy of the local community, particularly local artisans, souvenir sellers and pempek cooks. Pasar 16 Ilir is the only largest and busiest market in Palembang. The market is located beside Ampera Bridge and it provides a wide range of goods, from staple food to souvenirs such as Palembang’s typical cloth, Songket.

The 16 Ilir market actually has existed since 1821. At that time, the Dutch colony wanted to raise the economic potential in the region and, hence, it built shops and offices along the banks of Tengkuruk River. Tengkuruk River is a small river that empties into the Musi River.

It is easy to go to Pasar 16 Ilir. If you are from the airport, stay along Jl Colonel H Burlian and Jl Jenderal Sudirman by taking Trans Musi bus on corridor of Alang-Alang Lebar and Ampera. Just tips, stay cautious because there are still many pickpockets! 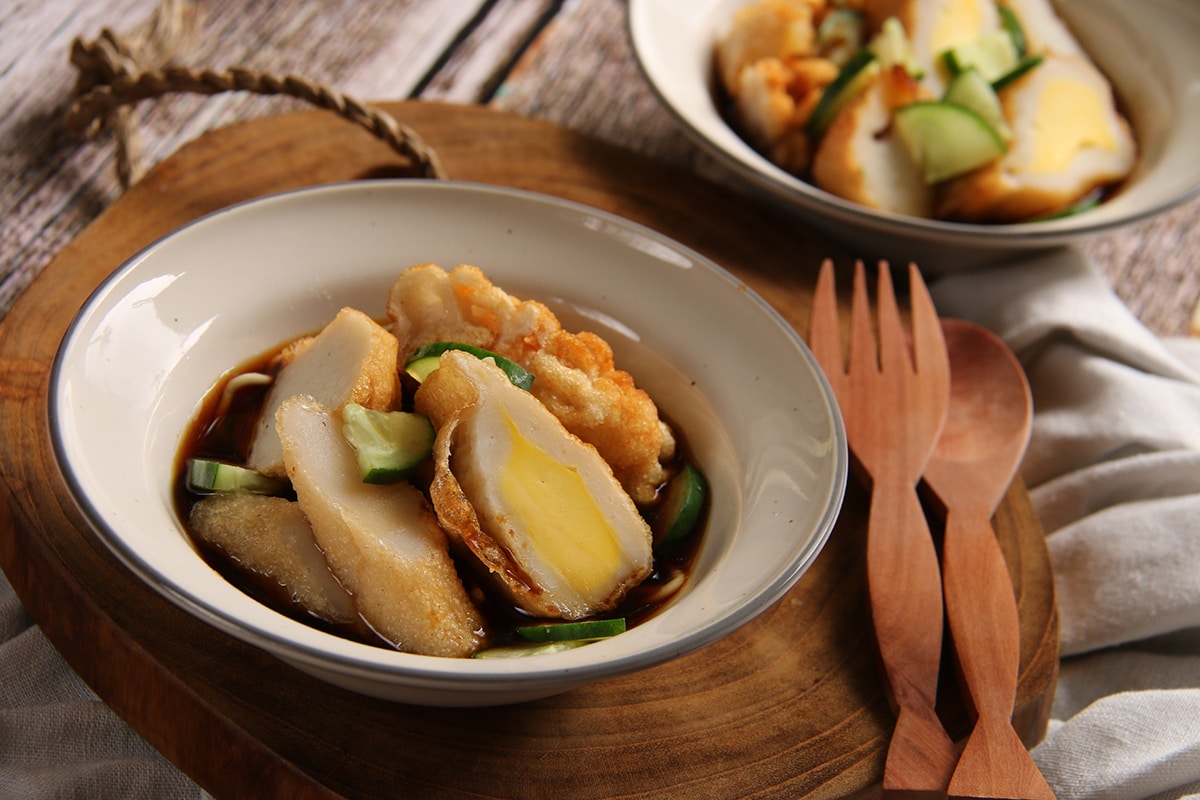 Your trip to Palembang can not be completed without eating pempek. Pempek is the local pride of Palembangnese, often called Wong Kito Galo. Pempek can be found in every corner of Palembang. However, you can also directly go to the pempek center called Kampung Pempek 26 Ilir or Pempek Village 26 Ilir.

When you enter the center, you will immediately see lining counters showcasing various types of pempek, such as kulit (pempek made of fish skin) and lenggang (pempek with egg). The best part is that the sellers sell pempek at very low prices, ranging from Rp 1000 to Rp 2000 for small pempek and Rp 10,000 for bigger ones.

To go to Kampung Pempek 26 Ilir, you can take the Trans Musi, motorcycle taxi, or bicycle rickshaw (locally known as becak). This village is only 300 meters away from the office of Palembang Mayor.