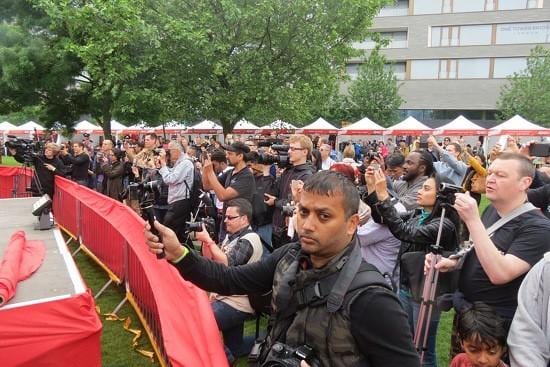 On 28th and 29th May,  London’s popular Potters Field  by  London’s iconic Tower Bridge was transformed into an Indonesian island where throngs of visitors came to dance together in a flash mob of poco-poco, watch riveting Indonesian pencak silat martial art, listen to gamelan music , see fashion shows, play the gasing or spinning top, and enjoy yummy Indonesian food that includes the mouth watering sate ayam, aromatic Toraja coffee and displayed the Wonderful destinations that spell Indonesia.    Held from 12:00am to 09:00pm for two continuous days, the event attracted families and onlookers from across London.

Livening up the atmosphere, the Indonesian Weekend kicked off with a flash mob of Poco-poco Dance, a very popular trendy dance originating from East Indonesia. Led by Lily Karmel, Head of Programs and Empowerments of Indonesia’s Cultural Sport Federation (FOKBI),  visitors could not but join in the flash mob , easily following the choreography,  dancing to its lilting music.

Indonesia’s  martial art of Pencak Silat was led by Cecep Arif Rahman, renowned Pencak Silat Master , a star in the  movie The Raid 2 that received international success. Many fans came specially to watch his performance, proving that Pencak Silat is fast gaining popularity internationally, Many Londoners came armed with cameras , and swarmed  instantly to the stage when Cecep and his students appeared on stage to perform some of the best Pencak Silat actions. Comments of “Wow!” and applause were heard repeatedly following each punch, kick, or duel simulations.

Fascinating performances were also brought by traditional Dance Maestro, Didi Ninik Thowok, and Ivan Nestorman who played beautiful music on the Sasando, the traditional string musical instrument from Rote Island, East Nusa Tenggara. There were also performances of West Java’s traditional angklung bamboo orchestra, and a range of traditional dances from all over the Indonesian Archipelago.

In the Culinary section, Degan Septoadji, judge in Master-Chef Indonesia, and Gede Susila Yadnya from the famous Potato Head Club in Bali demonstrated their creative flair in cooking some of Indonesia’s finest food. For the hungry, food outlets from Indonesian of UK-based caterers and restaurants and the emerging coffee houses of Java served authentic Indonesian food at their stalls.

At the official opening ceremony of the event, Indonesian Ambassador to the United Kingdom and the Republic of Ireland, Rizal Sukma stated: “This weekend celebrates the welcoming energy of our warm tropical country, manifest in the young artists and entrepreneurs we have brought here to promote our creativity while looking for opportunities to increased collaboration between our two countries.”

Organized by Bangga Indonesia Ltd and Ditali Cipta Kreatif, the event was supported by the Ministry of Tourism,  the Ministry of Industry, the  Ministry of Cooperatives and SMEs and the Ministry of Education and Culture, as well as the provinces of Central Java, Central Kalimantan, and the City of Bandung. Strengthening the growing commercial and tourism ties between Great Britain and Indonesia, the event has played its part showcasing the multi-faceted cultures of Indonesia to Londoners and tourists from all over the world, simultaneously promoting international awareness of the Wonderful Indonesia brand.