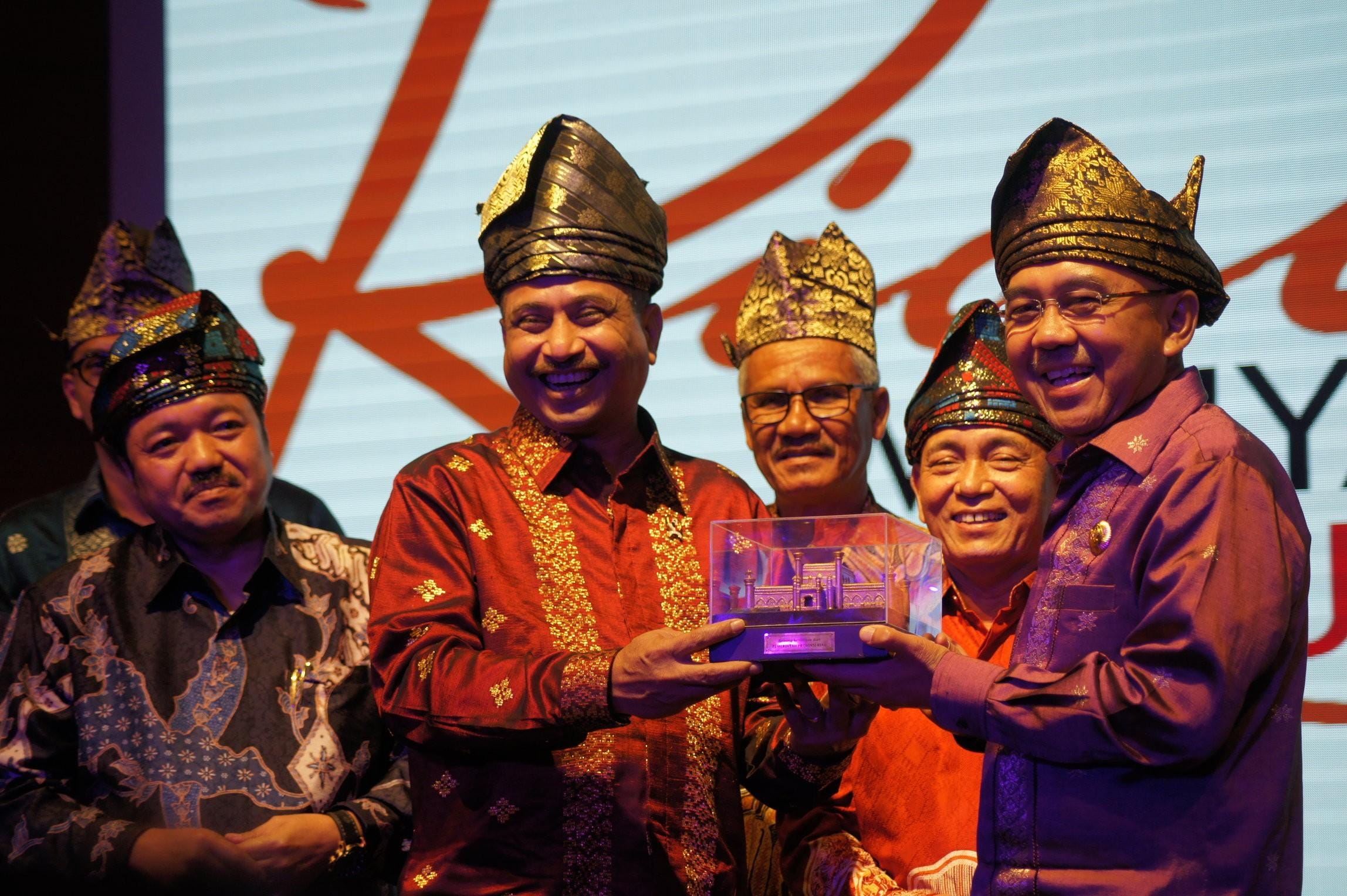 To boost tourism to the Riau Province on the island of Sumatra, Minister of Tourism Arief Yahya and Governor of Riau, Arsyadjuliandi Rachman, launched the Riau Province Calendar of Events 2016 at the Soesilo Soedarman Ballroom, Sapta Pesona Building (the Office of the Ministry of Tourism) on Thursday 27th May 2016.

To be held throughout 2016 the events highlight Riau’s diverse tourist attractions ranging from unique natural beauty, to cultural and man-made attractions that include Pacu Jalur, Bakar Tongkang, and the world renowned Bekudo Bono Tidal Bore Festival.

Minister Arief Yahya expressed his appreciation to the launch of the calendar of events which is in line with the overall program of Indonesia's tourism marketing efforts which this year target 12 million international tourist arrivals as well as 260 domestic tourists trips. “The decision to make Tourism as a top priority sector of the Riau Province is an excellent choice since other commodities such as oil or crude palm oil (CPO) which the province has so far depended on are showing a declining trend. Whereas, Tourism on the other hand shows an increasing trend and can become the largest contributor of foreign currency income” said Arief Yahya.

Meanwhile, Governor of Riau Province, Arsyadjuliandi Rachman explained that the province, which is closely associated with oil and palm plantations, is presently gearing up to develop tourism as a top priority sector. “Riau is currently undertaking all necessary efforts to develop tourism together with all stakeholders in order to improve the welfare of its population as well as boost the economy of the region. We also project that the tourism sector will also boost development of other sectors”, commented Governor Arsyadjuliandi Rachman.

Among events that will throw the spotlight on the province until the end of the year are:

Only recently discovered by the international tidal river surfing community, the Bono Tidal Bore by the estuary of the Kampar River in the Riau Province is drawing surfing communities from around the world to this amazing Indonesian pororoca. These tidal bores are known locally as “Bono”, which rush in with loud roaring sound at a speed of 40 kilometers an hour. The surf on the river can rise as high as 4 to 6 meters, at times creating barrels, the darling of surfers.

The exciting cycling event will take place in Siak Sri Indrapura Regency from 21st to 25th September 2016. This international sport tourism event is gaining popularity for international cyclists who love challenging tracks amidst setting of beautiful landscapes. This year, the event will definitely attract the participation of some of the world’s most competitive cyclists and teams.

To take place at the Kuantan Singingi Regency on 24th to 28th August 2016, Pacu Jalur is an exciting large scale dragon boat race, where boats are controlled by 45 to 60 rowers. More than just a competition, Pacu Jalur is a symbol of community values such as hard work and togetherness. The event will also be highlighted with a range of performing arts and a culinary bazaar.

Scheduled to take place at Bagan Siapi-api, Rokan Hilir from 20th to 21st June 2016 Bakar Tongkang is a ritual tradition of the people of Riau that has been preserved for centuries. Bakar Tongkang or literally translated as “Burning the boat” is a tradition that is rooted in history when migrating Chinese first settled in the area. As in previous years, thousands of Chinese descendents from all over the region will flock to Bagan Siapi-api to take part in this traditional event.

Celebrating the Islamic New Year which falls on the 1st of Muharram in the Islamic Calendar, the Gema Muharram will take place on 1st to 2nd October 2016 at the Indragiri Hilir Regency. The event will feature a number of religious activities as well as Islamic art and cultural performances.

Closing the year 2016, the Riau Province will stage the Riau Marathon which will be held at the province’s capital, Pekanbaru. Currently in preparation, the marathon is projected to draw participation from world class athletes as well as general running enthusiasts from all over the country.