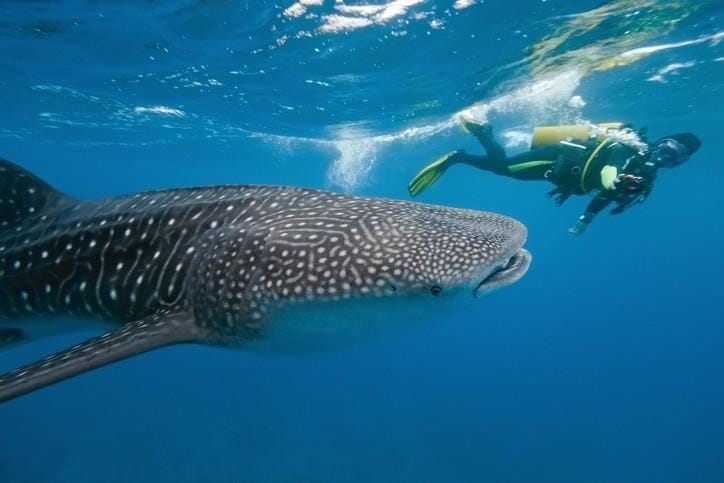 Home News Migrating Whalesharks Linger in Indonesian Waters: Love Them, Do Not Touch Them

Migrating Whalesharks Linger in Indonesian Waters: Love Them, Do Not Touch Them

Deep sea Divers from Flores to Papua, from Bunaken in North Sulawesi to Derawan in East Kalimantan have often spotted giant whalesharks migrating with the ocean currents from Australia swimming up north, to later return south again.  But lately, it seems, these huge mammals have decided to linger longer in these warm tropical seas presumably since they find food more easily here and feel unthreatened.

And indeed, the Indonesian Government has by Decree of the Ministry of Fisheries and Maritime Affairs No. 18 of the year 2013 proclaimed Whalesharks  as protected and endangered species, and are prohibited from being hunted and caught.

Villagers in the district of Bone Bolango  in the province of Gorontalo in the northern arm of the island of Sulawesi have noticed that since last year the whaleshark population in these waters has increased, so much so that it has become the latest craze for divers both Indonesian and from overseas to get up close and personal here with these fantastic creatures.  Despite their size, nonetheless, whalesharks do not attack humans, since they survive only on plankton and small fish.

Minister for Fisheries and Maritime Affairs, Susi Pudjiastuti decided recently to plunge herself into the deep here to view the situation.  Emerging from the sea, Minister Susi reminded that although the whalesharks are allowed to be observed for tourism activities, they should nonetheless still be protected.

“Yachts and boats carrying tourists must be limited in their numbers since a too large number of people and boats will put great stress on these fish”, reminded Minister Susi.

Whalesharks belong to one of the largest fish species in the world, growing to a length of 12 meters to 18 meters, and can live to between 60 to 100 years. They breed slowly, however, starting to breed only from the age of 25 and produce only one fish per productive period.

The village of Ulele, where these whalesharks are frequently found has been designated a regional conservation area by the local government of Bone Botango.

Besides gathering by the Bay of Gorontalo and the Bay of Tomini, whalesharks are also found in the Bay of Cenderawasih in north Papua, and are often spotted north of the Derawan Islands in East Kalimantan.

In the Philippines, the government has found that boats carrying tourists who gather to watch whalesharks have often maimed these unique animals by touching them, or boatsmen push them off with their feet to avoid the fish from overturning the boat.