Gordon Ramsay Gets a Taste of West Sumatra

Gordon Ramsay: Uncharted - Season 2 takes you on a gastronomical journey bursting with enticing flavors and adventures as Chef Gordon Ramsay digs deep into the amazing culinary cultures of Tasmania, South Africa, Indonesia, Louisiana, Norway, India, and Guyana. He catches some fresh giant spiny lobsters across the turbulent waters of Tasmania, collects mussels along the South African coast after jumping out of a helicopter into the great white shark-inhabited Indian Ocean, hits the off-road trails in Louisiana on an ATV as he hunts for local ingredients, rides across a cave system in Indonesia to catch freshwater shrimp, learns to make a bow and arrow to catch Arowana in Guyana, casts a giant fishing net with the local fishermen in India, and dives across the icy waters in Norway to find some sought-after delicacies like scallops, urchins, and clams.

On one of the exciting episodes of Gordon Ramsay: Uncharted - Season 2, the rich taste and variety of Indonesian food draws Ramsay to West Sumatra, the Indonesian culinary destination famous for its aromatic and flavorful cuisine. Here are some tasty bits of his hands-on culinary adventure: Famous chef Gordon Ramsay’s culinary curiosity takes him to West Sumatra, Indonesia, and he films the exciting journey for Gordon Ramsay: Uncharted S2 - EP Sumatra’s Stunning Highlands. He takes the opportunity to experience the authentic cuisine and gets a taste of the exotic culture of this region that’s home to the Minangkabau people. He unearths the secrets behind the popular regional cuisine, masakan Padang, as he learns about the delicious local ingredients and the deep-rooted culinary traditions and customs. Not only does he get a chance to tantalize his taste buds, but he also gets to satisfy his desire for adventure. Yes, Ramsay participates in the traditional bull race pacu jawi and takes the bulls by their tails as he races through the muddy rice paddies. He steps out of his comfort zone as he forages for local ingredients, milks a buffalo, catches prawns in a cave, and offers help as a shipmate on local fishermen’s boat.

Another highlight of celebrity chef Gordon Ramsay’s visit to West Sumatra is his encounter with Indonesian culinary legend William Wongso. With years of experience under his belt, William Wongso not only shares his knowledge as he mentors Gordon Ramsay but also challenges him with the task of mastering beef rendang in one week’s time. Taking help from William’s culinary expertise, Ramsay puts his skills to test during the big cookout and does a lot of preparation to be able to serve some delicious rendang.

Learning from the Locals 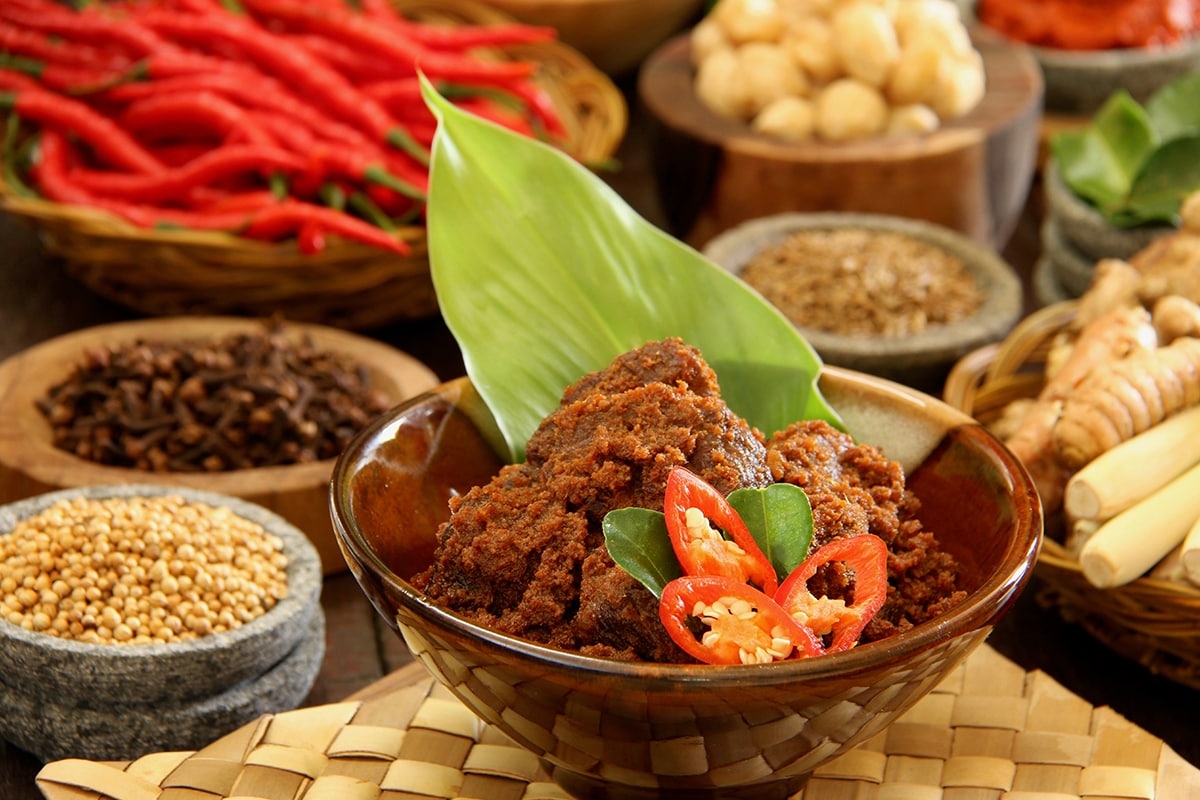 Rendang is a famous traditional Indonesian dish that originated from the Minangkabau Highlands of West Sumatra. According to Professor Gusti Anan of the University of Andalas in Sumatra, the Minangkabau people used to carry rendang with them when they traveled. The generous use of spices and the long cooking period contributes to the long shelf life of rendang. Rendang is known for its unique cooking process where meat is slowly cooked in a spicy coconut mixture. It is commonly made with beef, but there are other varieties that are made with chicken, mutton, duck, beef liver, beef lungs, and eggs.

Ramsay heads to the locals in search of the perfect rendang recipe. He learns some tricks, takes some tips, and discovers the authentic local ingredients under their guidance. He also takes an interesting lesson in grinding the spices on a Sumatran pestle and mortar. He makes way to a local woman’s kitchen to learn some cooking techniques and takes inspiration for his rendang recipe.

Internationally‐renowned chef Gordon Ramsay has a great time as he embarks on a journey to West Sumatra to master the intensely-flavorful rendang. He seeks culinary inspiration from Chef William Wongso and interacts with the locals to get a deeper understanding of the traditional style of cooking the perfect beef rendang.

But beyond the tasty cuisines, there’s so much more that you can explore in West Sumatra. There are a number of beautiful parks and reserves, museums, amazing surf spots, active volcanoes, pristine lakes and beaches, hilly rainforests, and peaceful villages that are some of the major attractions in West Sumatra.

Don’t forget to catch Gordon Ramsay: Uncharted S2 - EP Sumatra’s Stunning Highlands on National Geographic Network, on Monday, June 29, at 9 AM Jakarta Time (or the re-run at 9 PM Jakarta Time) and be inspired to discover the hidden gems of West Sumatra on your future trip.