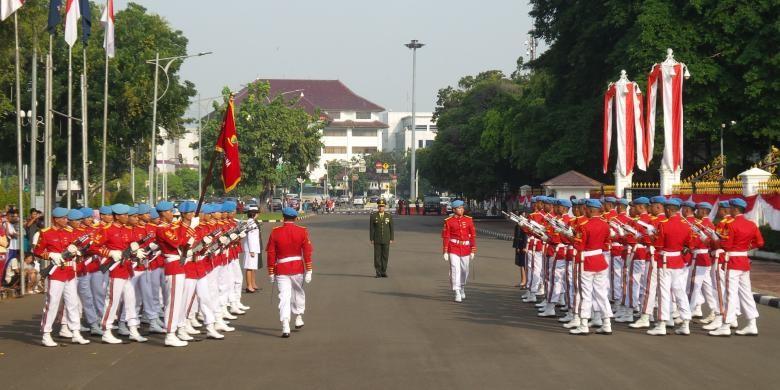 'Changing of the Guards' is now also Open to the Public

For the first time, the ceremonious Changing of the Guards at the Merdeka Presidential Palace in Jakarta will be exhibited to the public. The impressive ceremony which involves 24 members of the Presidential Security Detail (Paspampres), will be routinely held on the front yard of the Merdeka Palace every second Sunday of the month at 8 AM (WIB).

Previously a closed affair, the public will now be able to witness the ceremony first hand when Paspampres members inspect weaponry, ammunition  and uniforms,  also showcasing a variety of impressive skills such as weapon throwing.

Paspampres Commander Maj. Gen. (Marshal) Bambang Suswantono stated that the public display of this ceremony comes as a directive from the President himself with the aim to promote stronger ties between the government and its people.

Merdeka Palace is usually a secure and private venue, reserved for official events and limited to government staff and foreign dignitaries except at Indonesia's Independence Day celebrations. The move to invite the public to observe the prestigious grounds and ceremony at closer range, is expected to invoke a stronger sense of confidence and togetherness among the people.

“Indonesia wishes to follow other countries, where this ceremony is often open to the public” Bambang said. The President also hopes tthat his will change the public image of the Paspampres as this opportunity will allow the public and media to be better acquainted with their duties and take photos with the “once intimidating looking Paspampres members”.