Sensational Jakarta Marathon 2017: “Never Give Up”

Continuing its success of all its previous editions, on Sunday, 29 October 2017 the Mandiri Jakarta Marathon –the biggest running event in Indonesia- will again turn the streets of the capital city of Jakarta into a colossal race track for thousands of runners on Sunday. This mega sport-tourism event is jointly presented by the Ministry of Tourism of Indonesia and the Jakarta Provincial Government in cooperation with promoters INSPIRO and Bank Mandiri as main sponsor. With the Start and Finish Line at Jakarta's iconic National Monument (Monas), the race will again pass some of Jakarta's most prestigious landmarks including the Old Batavia Complex and the Fatahilah Square, the Istiqlal Mosque and the Catholic Cathedral, as well as the Hotel Indonesia Roundabout. Meanwhile 10K and 5K runners will be passing some of the most impressive buildings in Jakarta's own Central Business District. The Jakarta Marathon's route is certified by the Association of International Marathon and Distance Races (AIMS) and the International Association of Athletics Federations (IAAF) at elevation level 0 m/km. 16,000 runners have confirmed to join this running fiesta. Among whom, 1,585 are international athletes and running enthusiasts from no less than 50 countries. This year, a total cash prize of IDR774 million await the winners of the Marathon. Entering its 5th edition this year, the event has chosen the theme: "Never Give Up". Sapta Nirwandar, chairperson of the Jakarta Marathon explained that through the theme it is expected that Mandiri Jakarta Marathon 2017 will boost the spirit of the runners in the competition and more widely spread the spirit of 'Not giving up against all obstacles' to all. Although the capital city is in the midst of a massive infrastructure development (including preparations for hosting the ASIAN Games 2018), the organizers and all the related parties are making all efforts to overcome any obstacle in presenting thismega sport-tourism event. Meanwhile, the newly inaugurated Governor of Jakarta, Anies Rasyid Baswedan has also expressed his confidence that the Jakarta Marathon event which has been included in the annual agenda of the city, will attract more tourists to the capital city. "As host, the city of Jakarta is truly proud and fully prepared to establish Jakarta as a world class sport tourism destination by improving all necessarysupporting infrastructure and policies. The timing is also perfect, since we are in the midst of preparing to host the Asian Games 2018" said Governor Anies Baswedan. 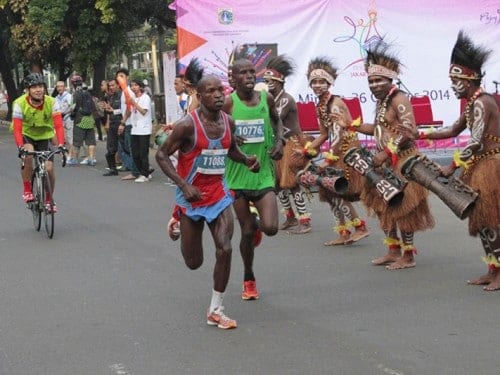