If you are currently in Lombok Island of West Nusa Tenggara, be prepared for the pinnacle celebration of Bau Nyale Festival 2019. This year, there are several highlights held in various venues from 17-25 February 2019. Starting with surfing competition in Seger beach, photography contest, , creative dialogue, and culinary expo. The main highlight of the festival is going to be held on 24-25 February, when people flock to catch the appearance of Nyale sea worms in the first light of day. Nyale only appears once a year and are treated as good fortune especially for those who succeed in catching them. Some even stay overnight around the venue to join this unique annual folk festivities. Image: Seger Beach at noon, the venue for the main event of Bau Nyale Festival 2019

Several events are held in the beautiful Kuta Mandalika area, a new tourism area planned to be the next hot spot for travelers to enjoy their time in the southern part of Lombok. One of the crowd magnets of this year’s festival is Peresean. The traditional martial art of the Sasak Tribe that is so exciting to watch, and has been known as the symbol of manliness. It is a combination of body movement, dance, agility, strength, and strategy. Two adult men with traditional costume go on a one on one fight, armed with a special stick named Penjalin, shield called Ende and with referees known as Pakembar. The fight will start with a bow to the audience, and then the dynamic tempo of the traditional musical instruments will pump up the ambiance as the Pepadu or fighters begin their rounds. Crowds will get so excited when the fighters give a great performance full with action and even throws in some money into the arena to give encouragement. The money will then be divided equally amongst the fighters along with a friendly hug to end each match in peace and no grudge. Another exciting thing is that the fighters can be picked randomly from the audience and anyone can also challenge others. Back in the war days, besides honing the martial art technique to evict enemies, Peresean was also performed as rituals to summon the rain. As part of the festival, The Creative Dialogue event was held at the Bazaar Mandalika area which will be the main site for hundreds of Lombok’s special art and souvenir shops. Beside being attended by Arief Yahya, Minister of Tourism, the dialogue featured some art performances, cultural expo and fashion show that showcased the best designs inspired by Lombok’s iconic weaves. 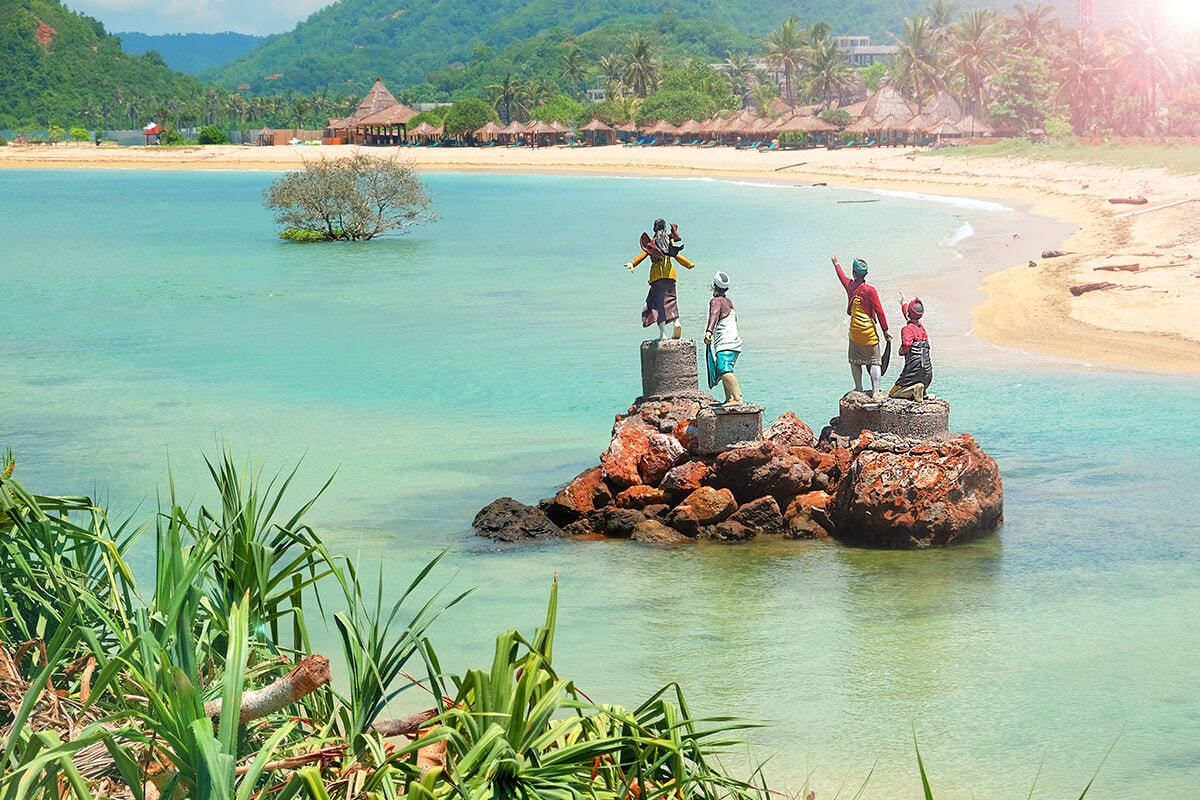 Image: Statue of Princess Mandalika who threw herself to the sea in order to keep peace and reincarnated as the precious Nyale

Make sure you join the series of the event towards the peak celebration of Bau Nyale Festival centered in Seger Beach. Don’t forget to search for Princess Mandalika and learn about her legendary story that inspired this exciting festivities!