Every year, from the 1st to the 10th Muharram in the Islamic calendar year, - which also marks the New Year in the Islamic calendar, - people in the province of Bengkulu on Sumatra rejoice in the unique ritual celebration of the Tabot Festival. This year, the event falls on the 10th to 20th September 2018, when Tabot - which is both religious and social-cultural in nature, - will again take place centered at the Merdeka Field in the city of Bengkulu. 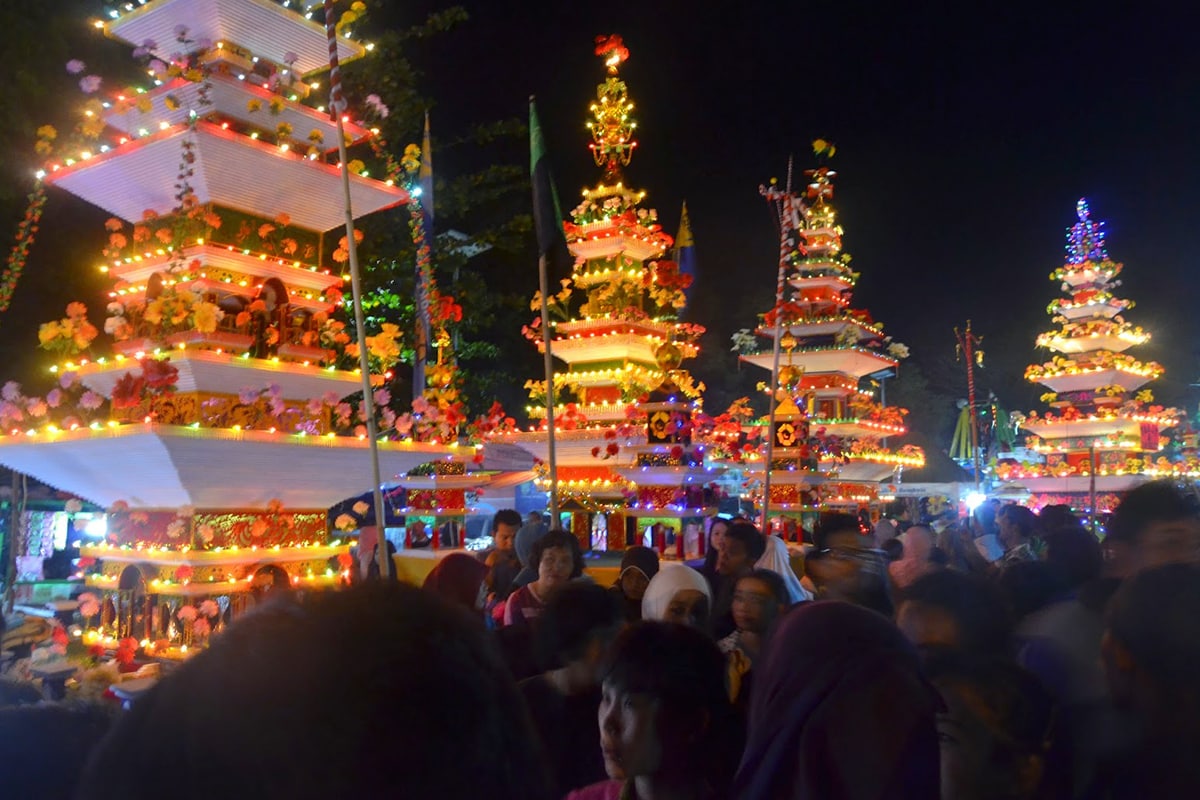 Tabot Festival is a recreation of the tragic events that befell Hasan Hussein, grandson of the Prophet Muhammad, and is, therefore, commemorated in his honor. According to history, in the year 61 in the Islamic Calendar, on his journey to Iraq,  Hussein was ambushed by troops of Ubaidillan Bin Ziyad. A fierce battle ensued in the desert of Karbala, where Hussein was ultimately killed. It is believed that the Tabot ritual was first staged in Bengkulu in 1685 by Syeh Burhanuddin, also known as Imam Senggolo. He was among the first to spread Islam in Bengkulu where he married a local girl. His descendants were later known as the Tabut/Tabot family. The ritual was passed down the generations by members of, what has become known as, the Tabot Family Community. As ever, the highlight of the ritual is the impressive procession of the Tabot towers on floats carrying Hassan Hussein’s replica coffins. These unique creations are made from bamboo, rattan or paper maché and lavishly decorated with colorful paper, wooden carvings, artificial flowers lit up by sparkling lights. The parades are accompanied by musical sounds from traditional instruments following the beat of the dol, a round drum measuring 70 – 125 centimeters in diameter. These dol drums are another essential part of the Tabot parade. The many coffin replicas and miniature tombs are then paraded to the city center in a re-enactment of the “battlefield of Karbala.” This is the highlight of the event which is attended by thousands of local and international visitors. The Tabot ritual follows certain stages called: mengambik tanah, duduk penja, meradai, merjang, arak penja, arak serban, gam, araka gedang, and tabut terbuang.
In addition to and complementing the ritual, - and despite the serious nature of the event, -the festival will feature an array of performances, competitions, games, and sports and other festivities. Among the many activities, this year there will be a traditional horse carriage race, a Tabot dance performance, and other art and cultural shows. Most events will be held at the Balai Raya Semarak Bengkulu. To reach Bengkulu, you can fly from Jakarta, where 6 daily flights are operated by Lion Air, Sriwijaya Air, Citilink, and Garuda Indonesia. There are also flights to Bengkulu from Medan.  If you feel more adventurous, take the overland route by renting a car or take the cross-province bus. From Jakarta, this route will take you across the Sunda Strait to the city of Bandar Lampung passing the pristine forest of Liwa and the dense Bukit Barisan National Park. In Bengkulu city, there is a choice of over 50 accommodation facilities, ranging from homestays, inns, to star-rated hotels. To make your adventure even more special, most hotels are located near appealing tourist attractions.