When former US President Obama vacationed in Yogyakarta last June, he made a special request to be shown a Wayang Kulit or Shadow Puppet Show, that was then performed for a limited audience in the hotel the Obamas stayed, Called the Tentrem Hotel.

Wayang Kulit dramas are similar to Shakespeare's historic dramas that are filled with deep philosophical values, wisdom and statesmanship. The episode shown was called Aji Narantaka, the supernatural powers owned by Gatotkaca, a main character in the Hindu Mahabharata epic poem.

Main Characters in the Play are:

Gatotkaca: Son of Bima (The Second Pandava) whocame to receive the Aji Narantaka supernatural powers. He is portrayed as being half rhaksasa (giant) who has the power to fly and is therefore portrayed as having wings.

Dursala: Is the son of Arya Dutsasana. He is big, tall and handsome. He is also powerful but arrogant. Gatotkaca's nemesis.

Resi Seta: Resi is a title for a knight with supernatural powers. Resi Seta is wise and has magical healing powers.

A few years before the onset of the Bharathayuda War, Gatotkaca and his brothers — the Pandavas — were holding military exercises at Tegal Kurusetra without having asked priorpermission. Just as the exercises began, messengers from the Kingdom of Astina arrived and instructed them to cease action. But the messengers' leader named Dursala had a hidden agenda, that is, to provoke the Pandavas, and thereby igniting a riot so that they would be justified to expel the Pandavas from there. As anticipated, Gatotkaca and his brothers refused to stop the military exercises, challenging Dursala instead to a fight. From that moment, the battle between Gatotkaca and Dursala began. Both men are equally strong and both possess supernatural powers. Dursala,carrying his Aji Gineng weapon, successfully hit Gatotkaca and made him fall unconscious. His brothers immediately evacuated Gatotkaca to a place of healing where he was given the Tirta Amerta, a supernatural healing power. Gatotkaca recovered immediately but he realized, that the power he possessed was weaker than Dursala's Aji Gineng. Gatotkaca sought the support of his senior master, Resi Seta, who told Gatotkaca that to succeed he should live the life of an ascetic for 40 days and 40 nights. And should not be tempted by any woman nor ever lose his temper, or he would fail in his quest toreceive higher powers. 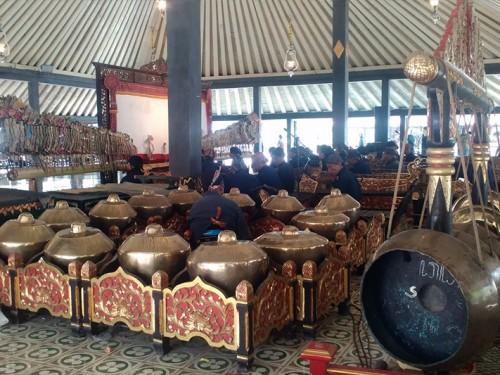 On the very last day of his meditation and self-isolation, however, a goddess named Sumpani appeared. Gatotkaca became irritated by her presence and impetuously slapped her in the face. Because of this action, therefore, Gatotkaca had failed to achieve the required conditions to attain higher powers. Resi Seta then told Gatotkaca that because he had slapped Sumpani, the power of Aji Narantaka would be transferred to Sumpani. He should marry her to regain the power to himself. After marrying Sumpani, Gatotkaca again came to be involved in a second battle with Durasala. But this time Gatotkaca succeeded and defeated him. The Aji Narantaka power had killed Dursala and had turned him into ashes.

Where to watch the show?

There are a number of places where the public can watch this performance in Yogyakarta, as listed below:

The SONOBUDOYO MUSEUM
Located at Jalan Trikora 6 Yogyakarta, regular shows start from 8pm to 10pm every weekday at the Pendopo Timur (east hall of the museum). Expect a ticket price of Rp 20,000 to enjoy 2 hours of puppet show, played by Yogyakarta's most famous puppet masters.

The SASONO HINGGIL KERATON
Located inside the Yogyakarta Keraton or Palace, the Sasono Hinggil Keraton is famous for its all night-long shadow puppet shows. Performances usually start from 9pm until dawn held on the second and the fourth week of every month. It is suggested to bring a pillow and have yourself a nice thick coffee to stay up during the performance. Entrance fee: Rp 5,000 to Rp 15,000.

If you're interested in collecting wayang characters, you can easily find them at a souvenir shop at Pasar Beringharjo (Jalan Ahmad Yani No. 16) — located about 800 meters north of the Keraton. Prices range from Rp 10,000 to Rp 600,000 according to size and quality.