Centered right along the narrow rim of stunning Mount Bromo's crater in East Java, the annual ritual tradition of Yadnya Kasada of the Tengger sub ethnic group succeeded to attract thousands of tourists to join in this unique event. The pinnacle of this intriguing ritual took place from Sunday (9th July) toMonday (10th July), coinciding with the 14th Day of the month of Kasada according to the Tenggerese Calendar. 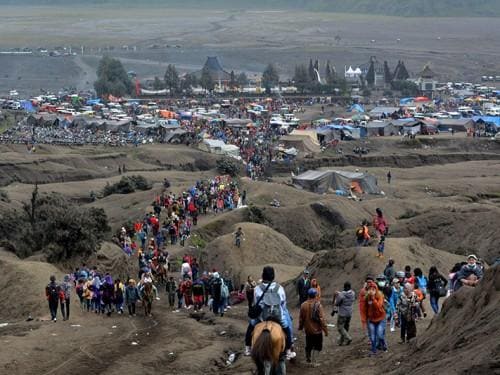 Although the chilly temperature that stood around 10 degree Celsius hovered around the area almost the entire duration, locals from various villages around the mountain as well as both national and international tourists were undeterred and meticulously followed each stage of this solemn and sacred ritual. For several days the four main entry points to Mount Bromo in the regencies of Pasuruan, Malang, Lumajang, and Probolinggo were a lot busier than usual. Hundreds of 4-wheel-drive jeeps especially prepped for the harsh terrain of Mount Bromo were packed with tourists who came from far and wide to observe this unique once a year tradition. The Pendopo Agung (Great Hall) of the Ngadisari Village was the initial point of the Yadnya Kasada. Various stages of the ritual took place here starting at 07.00pm West Indonesia Time. At midnight, the procession of a large variety of offerings walked to the Pura (Temple) LuhurPoten at the sea of sands right at the foot of Mount Bromo. There Dukuns (Shamans), elders, Tenggerese Public figures, as well as the entire Tengger community gathered to pray to Almighty God for peace, safety, good fortune, and prosperity. Nearing the first rays of dawn, all offerings were carried up to the edge of Mount Bromo's crater, and prepared to be thrown into the deep fiery cauldron. At the pinnacle of the ritual, the offerings were finally thrown one by one into the crater including vegetables, fruit, livestock, flowers and money, as expression of gratitude for what they have received in the past year. Despite the evident danger, some locals even risked clambering down into the crater to retrieve the sacrificed offerings, believing that these will bring good luck. For tourists, this is indeed an surreal sight. Just witnessing brave young men and women standing up so close right at the edge of the steaming crater as they try to catch the offerings, is truly an amazing sensation. The origin of this ritual stems from the ancient legend of Mt. Bromo, about a princess named Roro Anteng and her husband called Joko Seger. After many years of marriage, the couple remained childless. They therefore meditated atop Mount Bromo, beseeching the mountain gods for assistance. The gods granted them 24 children, with the condition that the 25th child must be thrown into the volcano as human sacrifice. The gods' request was observed, and so the tradition of offering sacrifices into the volcano to appease the deities continues until today, although instead of humans, chickens, goats and vegetables are thrown into the crater as sacrifice. Commenting on the success of this traditional annual event, the Deputy of Tourism Marketing Development of the Ministry of Tourism, Mrs. Esthy Reko Astuti said: "Prior to the Yadnya Kasada ritual, this yearthe pre-event of called Exotica Bromo was held, which is an attraction on its own. This, in turn caused tourists to extend their the length of stay here from the usual 1-2 nights to 3-4 nights. Almost 10 thousand tourists came and stayed for a full 3 days, although the official data still await confirmation from the management of Bromo-Tengger-Semeru National Park." 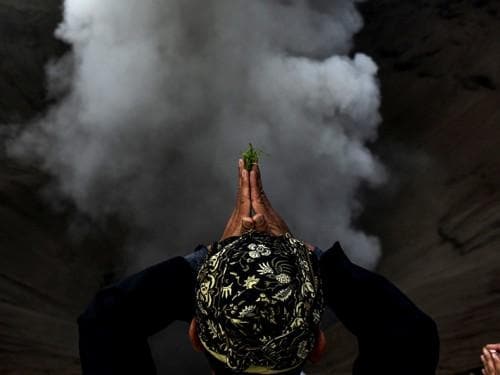 Meanwhile, Minister of Tourism, Arief Yahya viewed this unique event as a cultural attraction filled with valuable indigenous wisdom of the Tenggerese. Adding that the combined attractions of Mount Bromo's iconinc natural features and the fascinating culture of the Tengger community become a perfect fusion to boost the image of Mount Bromo. "Bali is perfect with its culture and nature, Yogyakarta has also identified the perfect match between culture and natural attractions, while the Bromo-Tengger-Semeru area has both qualities which definitely places this site among Indonesia's prime destinations," said Minister Arief Yahya.

2. The Yadnya Kasada Ceremony at Mt.Bromo

3. Bromo Huge Adventures: Cool Things to Do around BROMO VOLCANO

4. NGADAS, a serene village above the clouds at Mt. Bromo, East Java