Ready for some challenging actions? Then get ready! The Sungailiat Triathlon 2017 is scheduled to take place on 20th to 22nd April 2017 at Sungailiat, capital of Bangka Regency in the Bangka Belitung Province. This will be the perfect arena to test your prowess and endurance in the combined sport of swimming, cycling, and running. 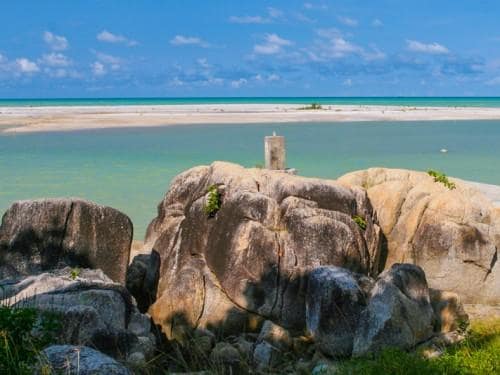 The Sungailiat Triathlon is projected to attract participation of over 500 triathletes from all over the world. Currently, there are already 400 participants from 19 countries who have confirmed their participation in the event. These are triathlon enthusiasts from Algeria, Australia, USA, Netherlands, Brazil, the Philippines, Germany, Japan, Italy, England, Canada, Malaysia, New Zealand, Singapore, Spain, Sweden, Romania, and France. Held in conjunction with the 251st anniversary celebration of Sungailiat, the event will also be held before the Bangka Expo 2017 which will take place at Batin Tikar Park on 27th to 30th April 2017. The expo will feature top creative products, tourist attractions, investment and trade opportunities, small and medium businesses, art and cultural performances, a culinary bazaar, and a whole rage more from 62 villages.

Aimed to push promotion of the splendors of Bangka Regency as well as to attract more tourists to visit the island once best famed for its tin mining, the event is presented by the Regency of Bangka with the full support of the Ministry of Tourism. “Sungailiat Triathlon will be the perfect icon for Bangka. We know that the province of Bangka-Belitung covers two large islands that together have tremendous tourism potential. While Belitung is already better known, it is now time for Bangka to also step into the limelight,” said Deputy for National Tourism Marketing of the Ministry of Tourism, Esthy Reko Astuti.

More information is available at: http://sungailiattriathlon.com/