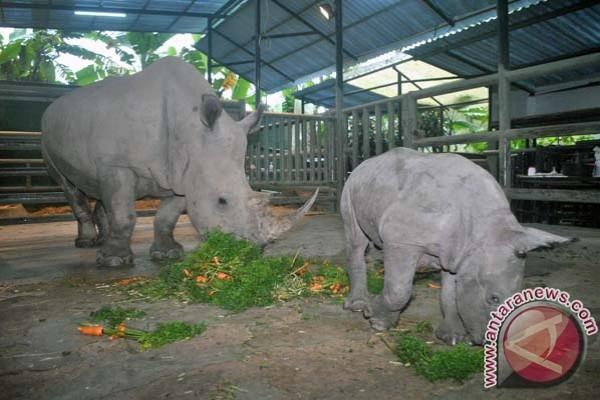 A rare African white Rhinoceros, listed among the world’s most endangered species was born at the Bali Safari and Marine Park on 24th March 2016, the second white rhino birth in the park. Being part of the Park’s conservation program for endangered animals, the young rhino was given the name ‘Maji’, being the calf of the female Rhino called ‘Dita’ and the male called ‘Nelson’.

“The white rhino calf was born naturally with no intervention of human hands, although the birth was carefully monitored through surveillance cameras” said Life and Science Manager of Bali Safari and Marine Park, Nimal Fernando, as reported by antaranews.com.

Before that, on 4th November 2015, a female rhino calf named ‘Pembe’ was born in the park from ‘Hima’ and ‘Nelson’. The birth of ‘Pembe’ was the latest addition to the Rhino family in the park since the arrival of ‘Hima’ some six years ago.

The white rhino or square-lipped rhinoceros (Ceratotherium simum) is the largest extant of the rhinoceros species. It has a wide mouth used for grazing and is known to be the most social among all rhino species. These majestic creatures are today endangered and are included in the 2006 red list of the International Union for Conservation of Nature (IUCN).

The birth of ‘Maji’ certainly adds to the popular attraction of the Bali Safari and Marine Park. Nimal further claimed that in Bali, this particular Rhino can only be found in this park. Having opened its gate for the first time in 2007, the Bali Safari and Marine Park is Bali’s leading family attraction and adventure park. The Safari Park has a vast collection of animals from Indonesia, India and Africa roaming free in large beautifully landscaped habitat. This allows park guests to observe the animals’ natural habits in wide open spaces that are specially created for them to graze or wallow into large ponds to cool off.

Indonesia has a number of Safari parks, besides the one in Bali, there is a Safari Park in the mountainous area near Puncak close to Jakarta and one near Malang in East Java.