On Sunday, 26th March 2017, 96 international tourists from Australia, Italy, Japan, Germany, and USA who boarded the MS Coral Discoverer Cruise Ship went on shore excursion on the beautiful island of Biak off the coast of the Cendrawasih Bay, in Papua Province.

This was the first time that a fly-cruise arrangement has been made on this remote island in Papua. Passengers who sailed to Biak on the cruise ship continued their journey from here  by air, while those arriving by plane at Biak boarded the Coral Discoverer to continue the cruise.

Indeed, the new cruise regulations issued by the government have made fly-cruise options through many ports in Indonesia now a most welcome option.

In 1976, Biak was an important transit stop for Indonesia's Merpati Airlines' Trans Pacific flights from Bali to Los Angeles, USA v.v., but was then discontinued.

MS Coral Discoverer, the Australian flagged cruise ship, arrived and made port at Biak Harbor at 06.00 East Indonesia Time. Some 42 tourists from various nationalities disembarked and were warmly greeted by the local population led by the Head of the Office of Tourism of Biak Numfor Regency, Turbey Onesimus Dangeubun.

During their time in Biak, the tourists were taken to the Binsar Japanese Cave, once used by Japanese soldiers during World War II. The visitors explored the remnants of World War II on the island, and were then brought to sites that held fascinating artifacts of that grim period that included military jeeps, bombs and warheads, various artilleries, and more. Guided by Biak's own interpreter, the excursion continued to Biak's Bird Park. Here, over 50 different bird species endemic to Papua, among which world's most beautiful Bird of Paradise, as well as different variants of beautiful orchids that all fascinated the visitors, where each species had its distinct coloring and characteristics. 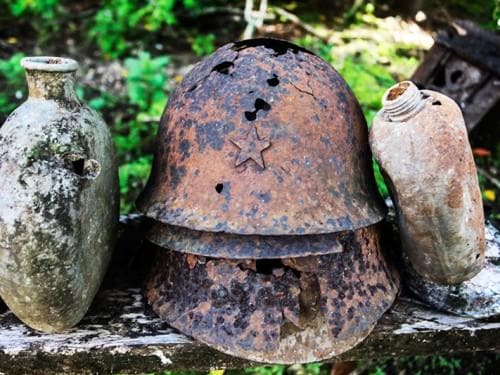 
After the excursion, the first batch of 42 tourists did not return to the ship but instead took offfrom the Frans Kaisiepo Biak Airport with the Air North charter flight direct to Darwin, Australia. Prior to departure, the tourists were treated with a special lunch at the beautiful garden of the Astana Hotel overlooking the open ocean. Next to a scrumptious meal, they were entertained with traditional music and dances of Biak. Although the excursion, which ended at 12.00 East Indonesia Time, was short, it most definitely left a lasting impression on the guests.

At around lunch time, the Air North charter flight had landed at Biak's Airport from Darwin, Australia, carrying 54 passengers who were also taken on a tour of the island. Upon clearing Customs and Immigration, the2nd group joined the first at the Astana Hotel, to enjoy the delicious buffet along with wonderful traditional dances and music welcoming the second batch to the attractions of Biak.

After lunch, the group explored the Binsar Cave, the historical Japanese WWII shelter. The excursion of this group was, however, shorter and at 15.30 East Indonesia Time they were ready to head to Biak Harbor to board the MS Coral Discoverer. At precisely 17.00 hrs, the ship sailed off to explore other formidable marine attractions in the eastern part of Indonesia. The next stop was Kwatisore in Nabire, where they made an up close and personal encounter with dozens of huge whale sharks, who have made the area their habitat. From there, the cruise continued to sail to Tobelo in North Maluku. “From our observation as well as confirmation from our guests, they were all very impressed and truly enjoyed the trip in Biak.  This was confirmed both by those who enjoyed the couple of hours shore excursion in Biak before taking the flight to Australia, as well as those who continued their cruise on MS Coral Discoverer to Kawatisore in Nabire and Tobelo in North Maluku” said Benny Lesomar, Director of PT Ekowisata Papua Tours & Travel who organized all land arrangements.