Spectacular Lake Toba in North Sumatra will continue the tradition of festivities this year with the annual Lake Toba Festival set to take place on 6th to 9th December 2017. This year, the festivities will be centered at   3 venues in the Bakkara sub-district on the shores of Lake Toba, at Sipinsur Hills overlooking the magnificent Lake, and also in the town of Doloksanggul in the Humbang Hasundutan Regency. As always, the festival will feature exciting activities including traditional art and cultural performances, competitions in traditional sport and folk games, handicrafts and culinary bazaars, a tourism seminar, and a tourism expo.

At Bakkara, festivities include the water sports competitions like the Dragon Boats race, a Swimming Competition, Running and Rafting completions, and a tour to the important heritage site of King Sisingamangaraja. Whereas at Sipinsur, aside from being the venue for the Opening and Closing ceremony, Sipinsur will also be the site for  a host of activities including the Geopark Toba Caldera Tour; the 500 meter Ulos (traditional  han d-woven fabrics of the Batak Ethnic Group of North Sumatra) exhibition; a Cultural Carnival featuring all sub-districts in  the Humbang Hasudutan regency, delegations from other regencies and provinces,  a parade of traditional music ensembles of Gondang Batak; a collaboration of traditional and modern music performance; Mass Choir Performance; Culinary and Handicrafts Bazaar; Vocal Groups Competition, and Guest Stars Performances. 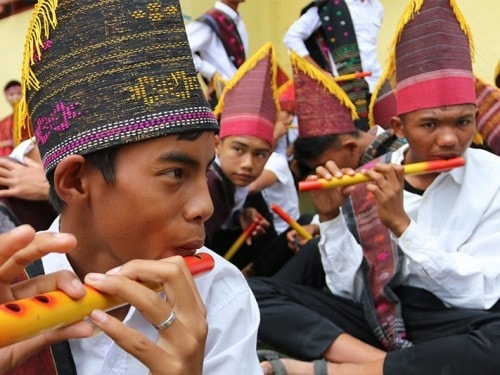 Lake Toba is one of the most fascinating natural wonders of the world. Measuring over 1,145 square kilometers with a depth of 450 meters, Lake Toba is acknowledged as the largest lake in Southeast Asia and one of the deepest in the world. Scientists have concluded that Lake Toba, which is a crater lake, was in fact created by one of the ancient earth’s mega explosions of a super volcano. Many scientists believe that the super volcanic event plunged the planet into a 6-to-10-years of volcanic winter Starting 28 October Silangit International Airport will be opened, with the maiden flight by Garuda Indonesia serving Singapore-Silangit route 3 times weekly. Today, tourists can fly in to Lake Toba via the Silangit airport from Jakarta and other domestic airports, cutting travel time to Samosir Island to 1.5 hours only compared to the previous 5 hours overland ride from Medan, capital of North Sumatra. To meet requirements for an international airport, Silangit’s runway has been extended to 2, 650 m, and its width to 30 meters, to be further widened to 45m before the end of the year. The apron has also been enlarged and the necessary drainage system installed. In the terminal itself, all facilities are ready, including the arrival and departure halls, and the Immigration, Customs, Health and Quarantine offices are all ready to start operation.