Banjarmasin is the capital and the pulsating heart of the province of South Kalimantan that rests gingerly over a labyrinth of canals thus giving it its illustrious nickname as the city of a thousand rivers. Just as any other major city in the country, Banjarmasin is abuzz with business and traffic. However the city has its own distinct charm that makes it the best place to absorb Kalimantan’s urban culture, both on land as on the water.

Here are 10 experiences you can look forward to in the City of a Thousand Rivers: 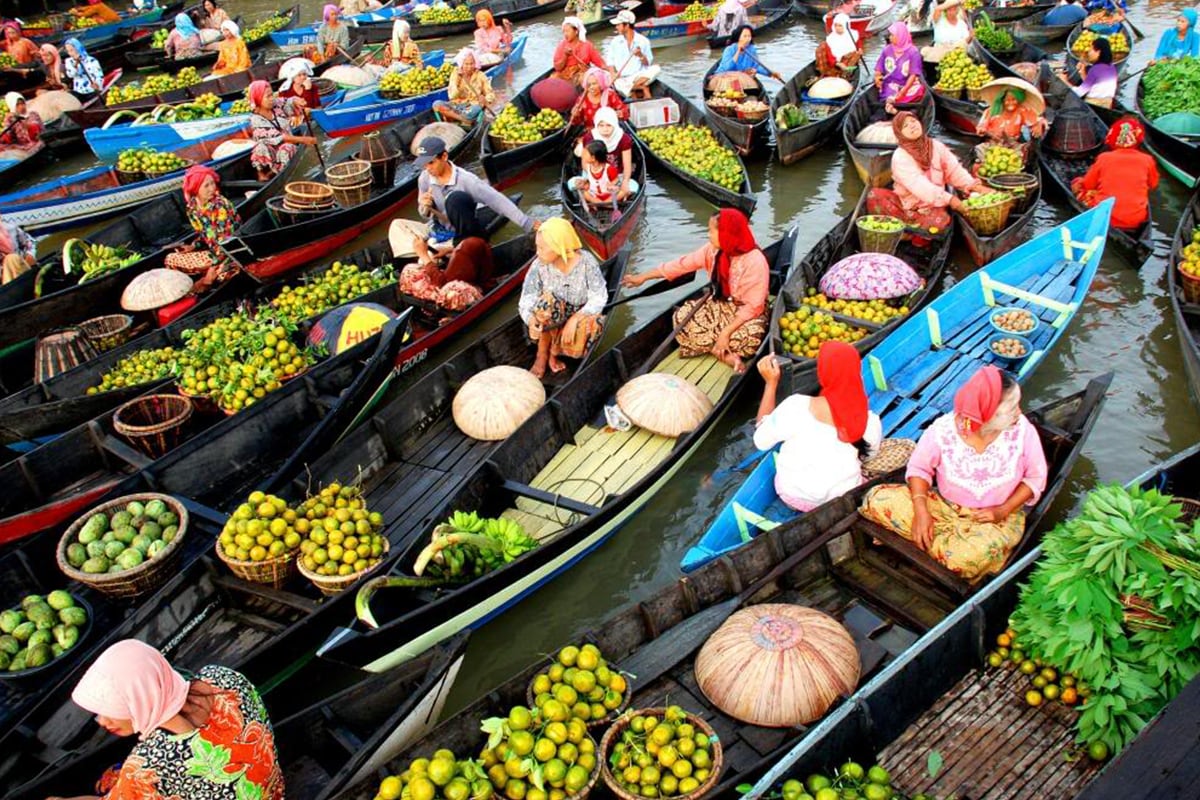 Banjarmasin has an abundance of wide and mighty rivers, which have always played a significant role in the  Banjarese’ (the indigenous ethnic group of Banjarmasin) way of life. To this very day, every morning there are floating markets where farmers and merchants ply their goods on boats to trade. This has always been a farmers market and it’s interesting to see the genuine river-based way of life.The most notable of these is the Muara Kuin Floating Market located on the Barito River, on the estuary of the Kuin River. Starting as early as 04.00 am, the floating market is the place to watch the  busy traffic of all kinds of boats fully laden with bananas, shrimps, fish, yams, spinach, coconuts, incandescent spices and chilies, buckets of fuzzy rambutans, and whatever other fruit happen to be in season. 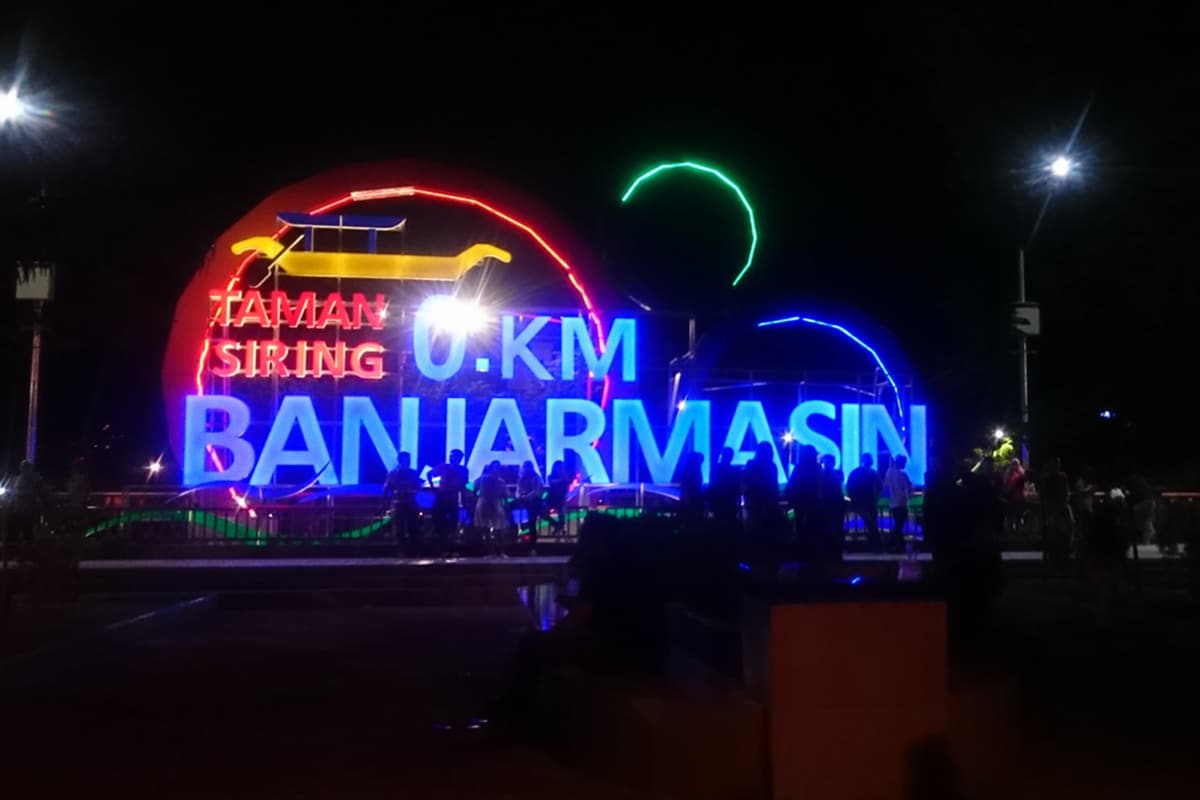 Offering picturesque sceneries of the wide Martapura River, Siring Park is located along the Jenderal Sudirman  and KaptenTendean Roads. The park is a favorite hangout for youngsters and families in Banjarmasin who usually come in the afternoon. This beautifully designed park offers appealing views overlooking the river, where you can also observe the activities of Banjarese on their traditional Jukung boats. As the name suggests, the park is where you can see the two mascots of Banjarmasin: The Proboscis Monkey and the Musk Mallow Tree.  Upon arrival, you will be greeted by a life size Proboscis Monkey right at the entrance and another statue of a Musk Tree with proboscis monkeys hanging on its branches just right by it.  Here, you will also find a greenhouse featuring a variety of plants such as cactus, the aloe vera, and more. Children will definitely have an enjoyable time since there are plenty of rides to choose and a dedicated kid’s playground. Wasaka is an abbreviation of Waja Sampai Ka Puting, motto of the South Kalimantan people which translates as: “Keep the spirit strong as steel from start to finish”. The museum houses historical collections in the fight of the people against Dutch colonialism. The building of the Museum itself is an old and genuine Banjar traditional house in the "BubunganTinggi" style (one of the 12 styles and the most representative). Among the collections are the Kris, wooden rifles, antique bicycles, Barajah shirts, dioramas, and an array more. Located not too far from the Muara Kuin Floating Market, on a delta in the middle of the Barito River, Kembang Island is where you can have a close encounter with unique proboscis monkeys. With its Latin name Nasalislarvatus, the monkey is locally known as Bekantan or the Dutch Ape due to its big and long red nose and large belly. The shy creatures are an endemic species which can only be found in Borneo and is known as one of the largest monkey species native to Asia. The proboscis monkey is an Endangered animal in the IUCN Red List of Threatened Species and listed in Appendix I of CITES. 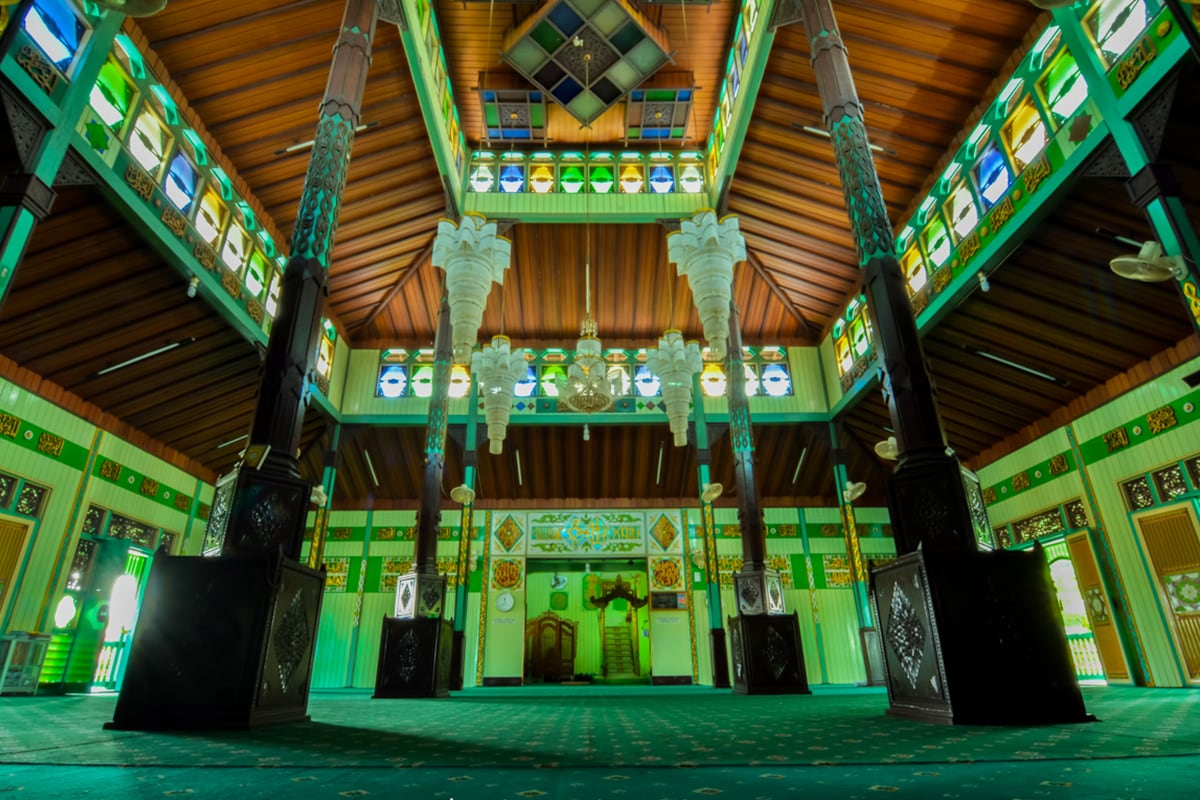 The Sultan Suriansyah Mosque is the oldest mosque in South Kalimantan and is said to have been built about 300 years ago during the reign of Tuan Guru (1526-1550), the first Banjarese King to have converted to Islam. It has a layered roof , showing Banjar’s pre-Islamic architecture, however it has features that are similar to those of the Demak Mosque in Java, which shows existing ties  between the two sultanates. Unique to old mosques of Banjar, the mihrab has its own roof, separated from the main building. The Grand Mosque of Sabilal Muhtadin is the largest in Banjarmasin. Sabil Muhtadin was chosen as the name of the mosque as tribute and appreciation to the late Grand Scholars, Sheikh Muhammad al-Banjary Arsyad (1710 – 1812 AD) who wrote the book Sabilal Muhtadin Lit-Tafaqquh Fi Amriddin.  The mosque is located right in the heart of the city and is decorated with the beautiful calligraphies.

8 | The Diamond and Jewelry market of Martapura 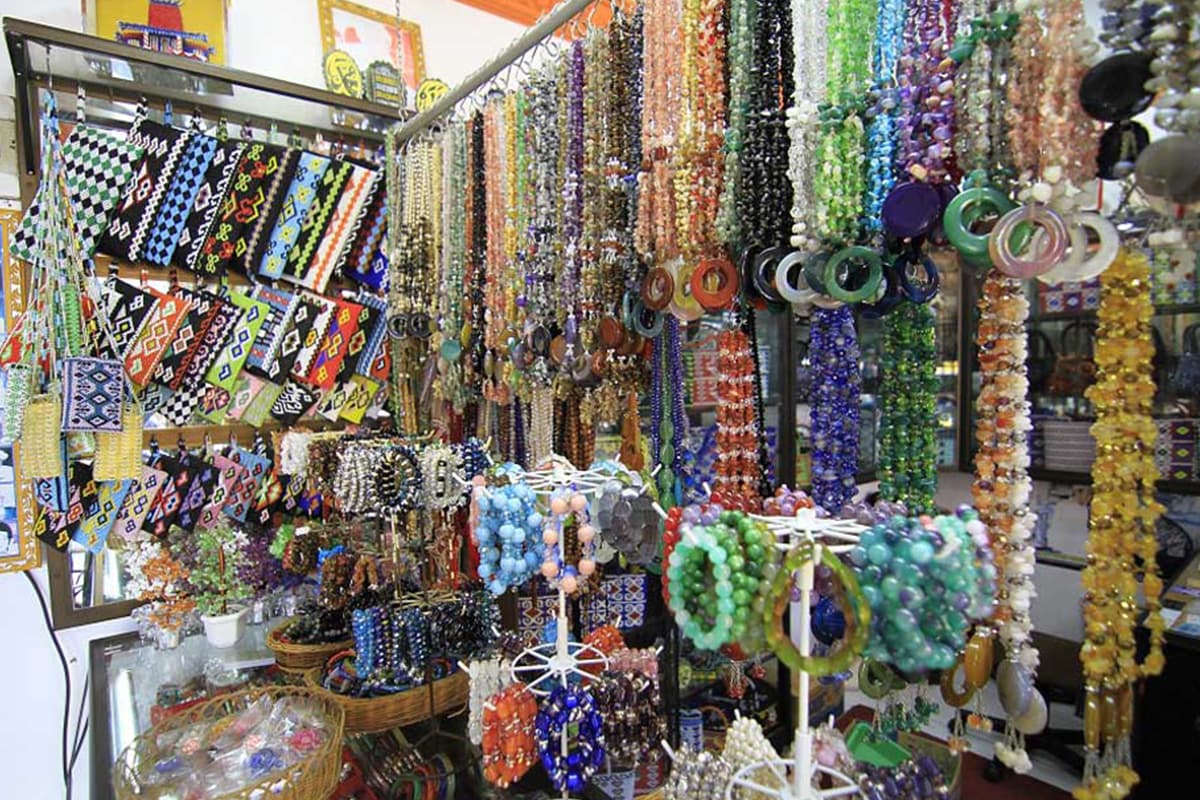 Situated some 45 Kilometers east of Banjarmasin, Martapura is a sparkling little city literally filled with diamonds and precious rocks mined from inside Borneo’s earth. The city is well-known as the center of the diamond industry as well as the main diamond cutting and polishing venue in Kalimantan, aside from being producers of top quality jewelry. For those who fancy jewelry and accessories such as necklaces, bracelets, rings, brooches, and various others made from pure diamond, gold, zircon, silver, and many other gemstones, or even of plastic or glass imitations, then Martapura is the place to be. The quality of Martapura’s jewelry is globally recognized as one of the best in the world. These sparkling treasures of Martapura are best found at the city’s iconic landmark in the diamond and jewelry market of Cahaya Bumi Selamat. 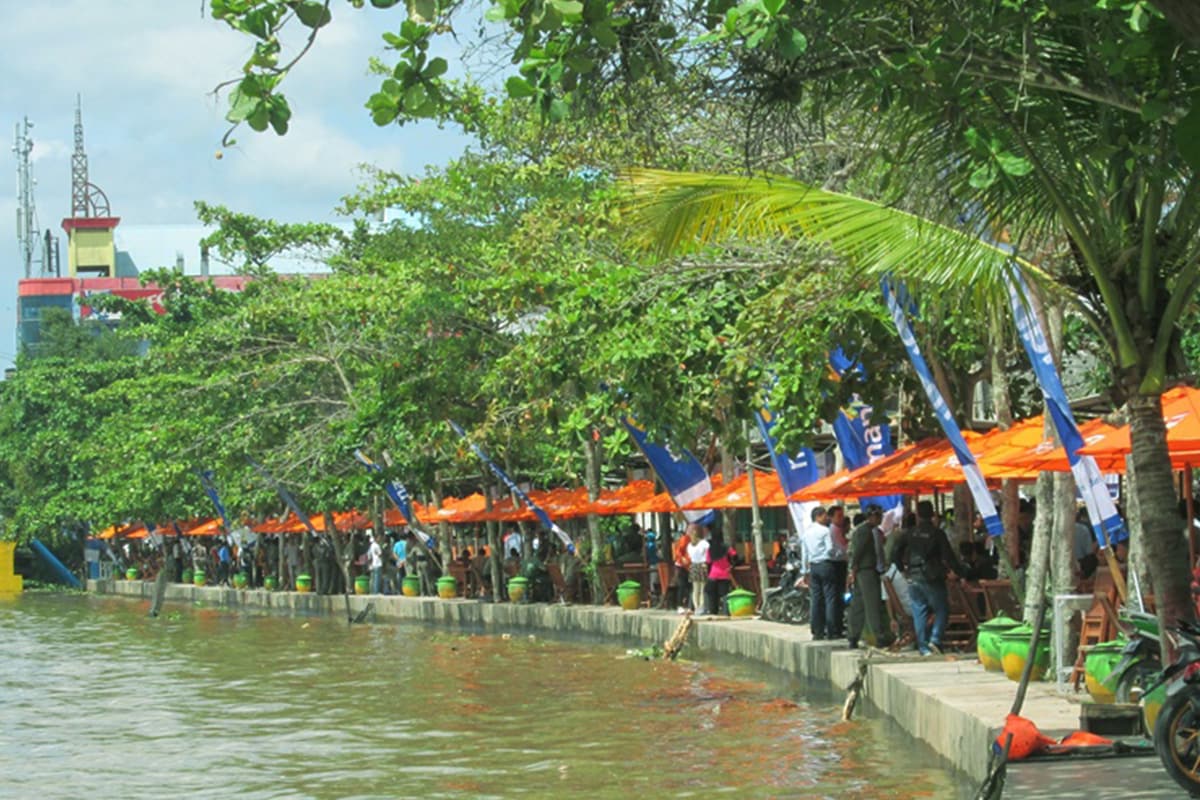 When in Banjarmasin, don’t miss the chance to enjoy some of the city’s most scrumptious culinary treats and the marvelous view of Martapura at the Martapura Riverside Culinary Center. This lovely little place is located at Pos Street that connects Jalan Sudirman  with the  Jalan Hasanudin. Along the 300 meter riverside, there are over 50 kiosks that sell an array of Banjarmasin most delicious menus such as Soto banjar, Laksa, Yellow Rice, and a host more of yummy food. Next to glittering gemstones, the province of South Kalimantan has its treasure  within the culture of its indigenous Banjar ethnic group itself. Passed down the generations and crafted by the finest hands of the Banjarese, the art of Sasirangan is a manifestation of Banjar’s ethnic sense of art on sheets of fabric. Sasirangan itself is derived from the Banjar word sirang or menyirang meaning “to stitch together” which illustrates the delicate process of hand stitching and weaving of the traditional fabric. A center for Sasirangan products can be found at Sasirangan situated at the Kampung Melayu area. Since 2010 the Sasirangan village was appointed as one of the city’s top tourist destinations by Banjarmasin’s regional government.