The Riau province (not to be confused with the Riau Islands province) is part of the mainland of the large island of Sumatra and is up to now better known as a center of Indonesia's oil production.

Today, with the booming tourism industry, Riau does not wish to be left behind in attracting tourists to its shores. So now, next to its more famed Bakar Tongkang (or Burning the last Boat) Festival, today it offers the exciting Pacu Jalur Festival 2017 held from 23 – 27 August 2017, still in conjunction with Indonesia's Independence Day celebrations. It is expected that more than 100 boats will participate in this trilling competition.

Pacu Jalur, literally meaning: the dug-out long boats rowing competition is a popular event at Kuantan Singingi by the Kuantan river, some 4 hours' drive from the provincial capital city of Pekanbaru. Here, large long logs have been dug out to build long boats that are rowed by many men together. At times there can be up to 60 crew in one boat that measures between 25 to 40 meters. Each of the crew has his own task, there is the commander who shouts out instructions, the helmsman, another one leads the boat by dancing from left to right, while another provides the "music" to provide rhythm and ensure regularity to rowers. All these are in order that the boat moves fast forward in the right direction, provide balance, and rowers follow the same rhythm. The race begins with the firing of a cannon, hereupon, the first batch of boats prepare themselves at the starting line. On the second boom rowers get set, and only on the third boom the actual race begins. The race is a combination of sport, art,mental and spiritual strength, and people believe also of magical power. For this reason the date of the races are picked out by the community. The logs are specially chosen through ritual from falling down the tree to towing it into the river. Meanwhile, even during the games, the magical powers will be at work to win the competition, even after having determined the game strategy and the best number of people to steer the boat.
Pacu Jalur itself is believed to have started in the 17th century. At the time the dug-outs or Jalur were used as a means of transport along the Kuantan river from the Kuantan Hulu at the source of the river all the way down to the Cerenti sub-district at the mouth of the Kuantan river. 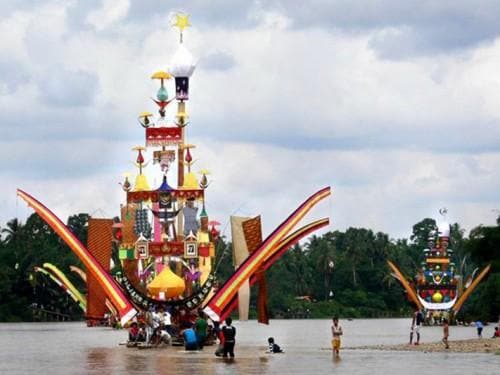 Later, these dug-out boats are painted or given decorations that include heads of snakes, crocodiles, tigers and sometimes added with umbrellas. In time its function shifted from being a mere transport means for the people, it became a splendid royal barge.

It was only a century ago that the Pacu Jalur races began, and only after Indonesia's Independence was it held regularly in conjunction with the Proclamation of Independence Day every 17th . August. 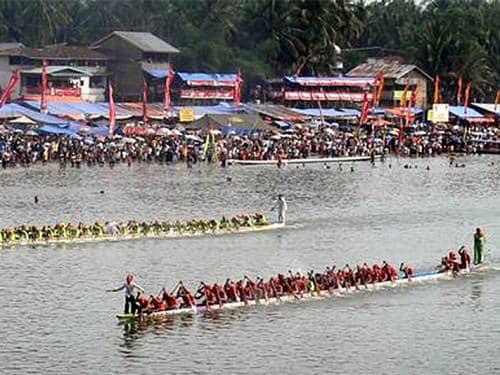 Since so many teams are expected to race, this is the reason why the event must be held in 5 days, which of course gives ample opportunity for everyone to watch
this exciting event.

To Get There, you must first fly to Pekanbaru; there are regular flights from Jakarta and Singapore to Pekanbaru. Rent a car at Pekanbaru airport and head to Kuantan Singingi. The journey takes about 4 hours. There are homestays and small inns available on location, but some people prefer to return to Pekanbaru or other closer towns for accommodation.

5. Bakar Tongkang Festival 2017 in RIAU: Burning a replica of the Last Ship