Dubbed as the biggest Tourism Fair in eastern Indonesia, the Majapahit Travel Fair 2017 will be held on 13th to 16th April 2017 at the Grand City Convex, Surabaya, Capital city of East Java Province, Indonesia's second largest city after Jakarta. This year, the event will specially highlight Adventure Tourism to boost interest of young travelers and adventure seekers to explore the fascinating wonders that are available in East Java. These include the early dawn climbs up iconic Bromo-Tengger-Semeru National Park and watching the blue flames around Mt. Ijen crater, Surfing barreling waves at Banyuwangi's G-lan, watch Madura's heart-stopping Bull Races, to enjoying family holidays at the Batu-Malang Jatim Park. Entering its 18th edition this year, the Majapahit Travel Fair (MTF) is a collaborative work between the Office of Culture and Tourism of East Java Province, the Association of The Indonesian Tours and Travel Agencies (ASITA) East Java Branch, and PT Debindo Mitra Tama, with the full support of the Ministry of Tourism. The event is also endorsed by Garuda Indonesia Airlines as Airline Partner.

MTF 2017 features the Travel Exchange (Travex) that will bring together Sellers and Buyers in round table/table top sessions held at Hotel Vasa Surabaya on 13th April 2017. Head of the Office of Culture and Tourism of East Java Province, H. Jarianto, explained that currently already 132 buyers are registered for the event. Among these, 90 buyers come from 23 countries that are target markets for East Java, countries that have direct flights to Surabaya, and new market countries. These include buyers from Malaysia, Singapore, Myanmar, Brunei Darussalam, Thailand, the Philippines, Cambodia, Vietnam, Japan, the Netherlands, Italy, India, China, Hong Kong, Bangladesh, and Saudi Arabia. While, the other 42 buyers are from domestic markets outside of East Java Province. Presenting their finest products and offerings, the Travex sessions will feature 66 sellers of various tourism businesses. Among these, 38 are businesses from East Java, while the other 28 are from various other provinces of the country including Jakarta, Bali, West Java, Banten, Yogyakarta, West Nusa Tenggara, and the Riau Islands.

"We will take Buyers on a familiarization trip visiting some of the most astonishing tourist attractions in Sumenep, Madura Island, which lies just facing the city, off the coast of Surabaya. This year, we have involved the Sumenep Regency to support our Travex session including presenting the Gala Dinner for t Buyers and Sellers," said H. Jarianto. Aside from the Travel Exchange, the main highlight of the event are the Travel Exhibition and Travel Fair organized by PT Debindo Mitra Tama held at the Exhibition Hall Grand City Convex Surabaya from 13th to 16th April 2017. Over 150 booths will showcase and offer tours visiting various splendid attractions of East Java and other provinces across the Indonesian Archipelago. The Travel Fair is open for public daily from 10.00 to 12.00 West Indonesia Time. The Fair will also be highlighted with a variety of games and competitions, shows and entertainment, and more.

Speaking for the Minister of Tourism, the Deputy of National Market Development of the Ministry of Tourism, Esthy Reko Astuti expressed her appreciation for the organizing of the Majapahit Travel Fair which has proven to have resulted in significant total transactions. "The number of buyers attending MTF has increased significantly by the year, and so did the total transactions. This proves that the tour packages offered by our sellers attract a lot of interests from Buyers, thereby increasing inbound trips to Indonesia," said Esthy Reko Astuti. 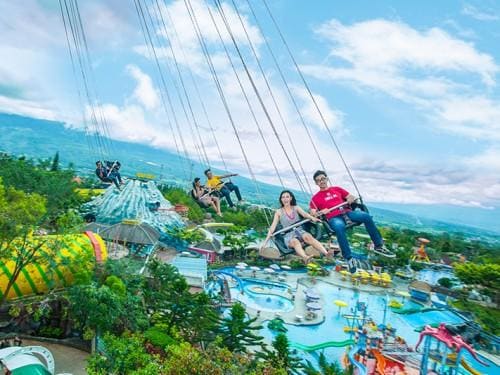 More Information is available at: http://majapahittravelfair.com/