Buleleng Festival 2017: The Power of Buleleng The normally quiet north coast of Bali will burst into music and dance when the Buleleng Festival 2017 takes place from 2nd – 6th August 2017 to be centered at the Singa Ambara Raja Monument, Puri Kanginan, and Sasana Budaya Cultural Center, in Buleleng Regency. In tune with the theme: "The Power of Buleleng", there will be tens of art troupes who will perform their dances accompanied by typical North Bali gamelan and music that will truly show the true power of Buleleng Regency. 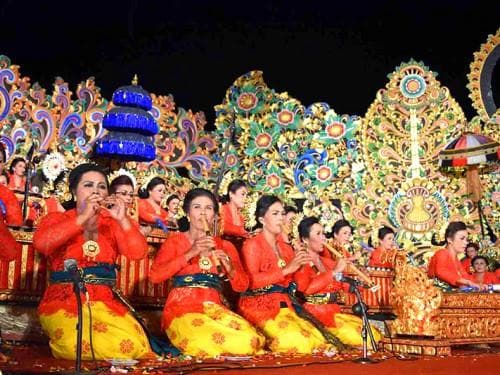 This year, no less than 52 cultural troupes from the regency and across northern Bali will be performing in the festival. Among the many performances, there will be a collaboration of Bondres and Genjek, Ramayana Ballet, Gong Kebyar, Janger Menyali Dance, and more. There will also be musical performances from renowned Indonesian Rock bands Kotak and Endank Soekamti. Bali's top bands, namely Lolot, Nanoe Biroe, Bintang will also join in on stage. As special highlight that will truly show the 'power of Buleleng', the festival will kick off with a mass Baleganjur art parade that will feature no less than 500 traditional percussionists from the regency. The exceptional parade will take place along the jalan Ngurah Rai street right pass the main stage. Capital of the Buleleng Regency is the town of Singaraja. Before Indonesia's Independence, - and before commercial aviation -, Singaraja was the entry gate to Bali, the prime port of call for passenger and cruise ships. The legendary Charlie Chaplin is said to have visited Bali on a cruise, arriving first at Singaraja. To the west of Singaraja, Lovina Beach offers the unique experience of an encounter with dolphins in their natural habitat. Further west along Bali's northern coast, the district of Buleleng also has the serene Pemuteran Beach. The most fascinating feature among Pemuteran's underwater splendors is the enchanting underwater temple garden which amazingly combines nature's beauty with impressive works of art. Still in Buleleng, located in the most north-westerly point of Bali, the West Bali National Park is home to over a hundred species of wildlife. However, the national park is best known as the sanctuary of the exotic white Bali Starling, an endemic iconic bird of the island of the gods. The national park also serves as the gate to the underwater paradise of Menjangan Island.