Situated some 90km northwest off the northern coast of Jepara Regency in Central Java Province, the Karimunjawa Archipelago is a chain of breathtaking coral-fringed islands replete with underwater splendor secluded in the open Java Sea. Here, the white beaches are sublime, swimming is wonderful, snorkeling is extraordinary, and the pace of life relaxed as a destination defined by coconut palms and turquoise seas.

The archipelago was formally declared a Strict Natural Reserve in 1986 and has since been one of the priority areas for the conservation of marine biodiversity in Southeast Asia. In 1999, the Ministry of Forestry established the Karimunjawa Marine National Park encompassing a total area of 111,625 hectares. In 2001, an area of 110,117.30 ha was declared as Marine Protection Area (MPA). Karimunjawa Marine Park is one of six such parks in Indonesia, and was among the first areas recognized as being important for the conservation and protection of marine biodiversity. 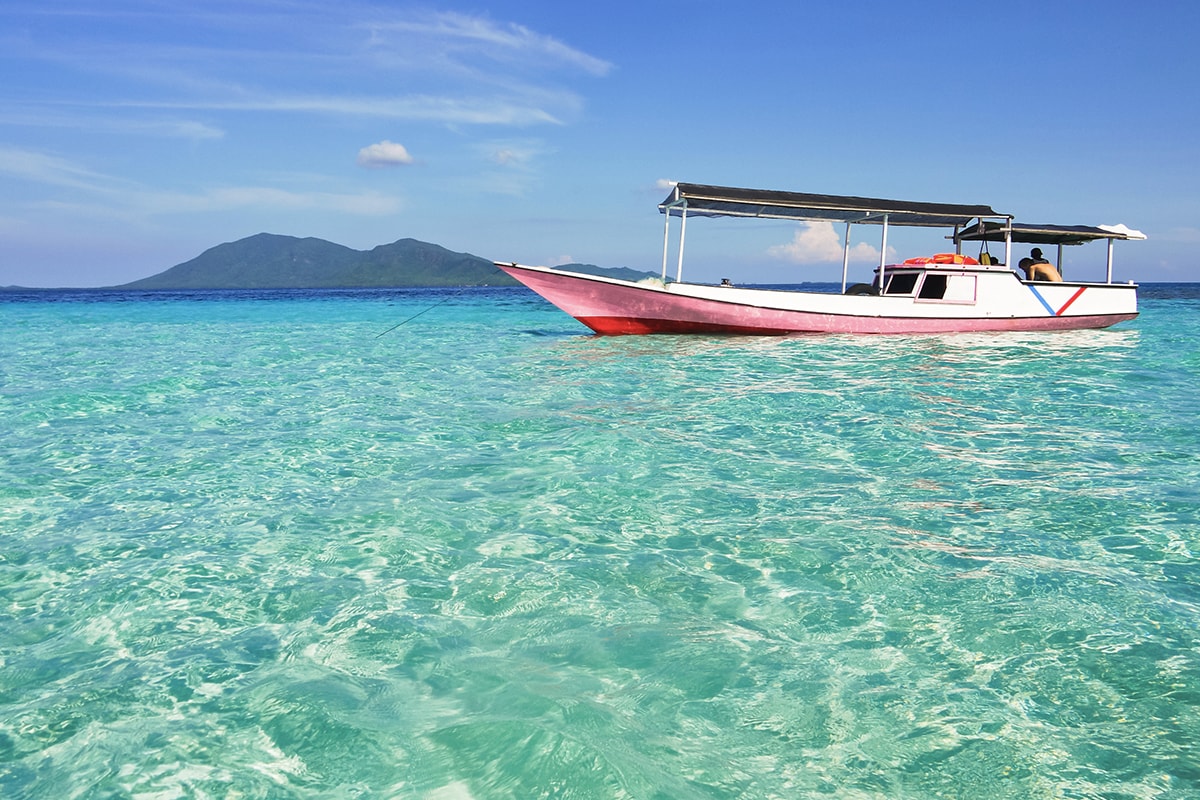 In total, Karimunjawa comprises 17 islands, where only 5 are inhabited. These are Karimunjawa Island (the largest and the archipelago's center of facilities and the local's economic activities), Kemujan Island (where the Airport is located), Nyamuk, Parang and Genting .

As a marine national park, Karimunjawa has a mix of 5 different ecosystems, that promise a series of nature adventures for any visitor. Coral reefs, sea grass and seaweed are three marine ecosystems next to the lush mangrove forest that splendidly reflects images over the rippling water surface. As your boat cuts across the still water in the morning, you will see the warmth of the early sunrays fall on the lowland tropical forest along the coast. They look fantastic. The biodiversity found in Karimunjawa is wondrous; among the most significant are the 44 different species of mangroves, 11 species of sea grass, 9 species of sea weed, and 444 species of fish. The coral itself has 176 different species that you will likely see while snorkeling. Two protected biota species here are the black coral (Antiphates sp.) and organ pipe coral (Tubipora musica). Others include the triton trumpet, the hornet helmet, and the pearly-chambered nautilus. Here are also hawksbill turtles, common green turtles, and on land are the red-breasted parakeet and other tropical bird species.

Among the many, the favorite spots for snorkeling are at Gosong Island, Menjangan Kecil Island, Tengah Island, Tanjung Gelam Island, and Cemara Kancil Kancil. At Menjangan Besar is a shark pool where you can safely swim around. You don't need to worry since these are a relative tamer sharks species, while a guard will brief you about safety and security and keep a close watch as you swim with the sharks. 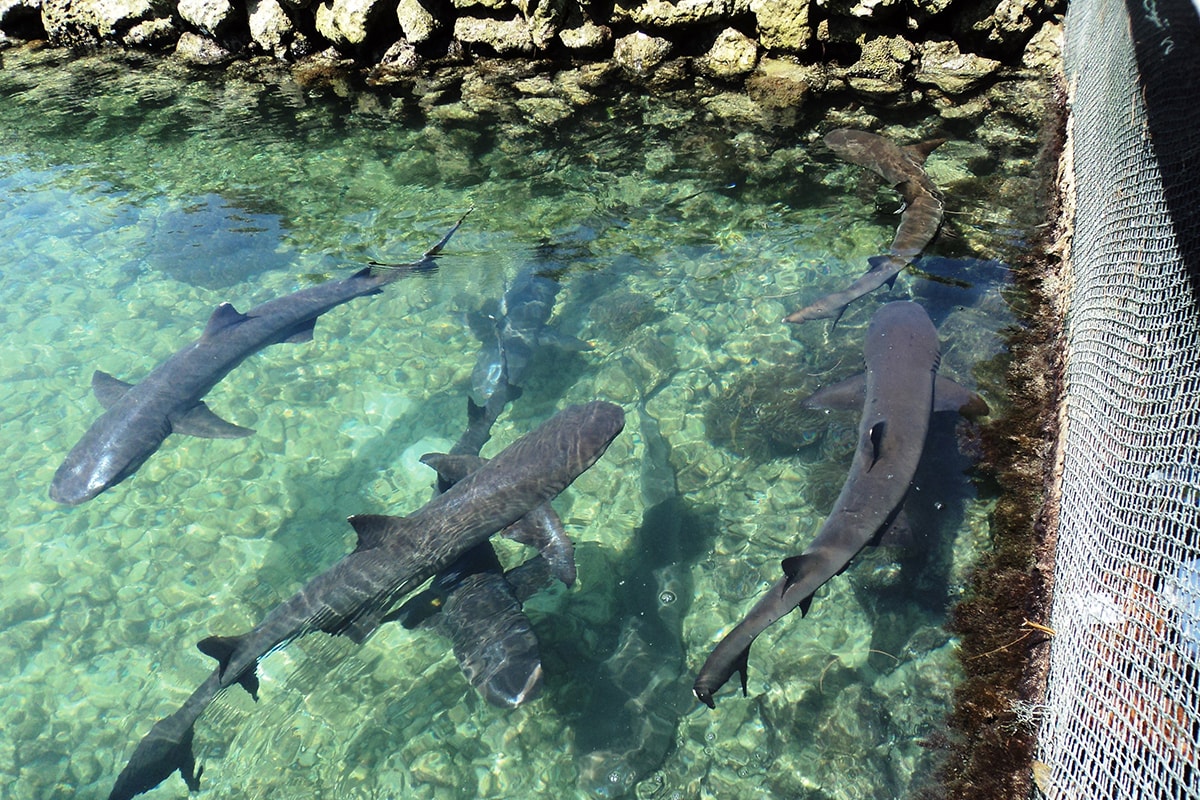 Some of the uninhabited islands make a perfect place for a lunch picnic or other fun relaxing activities under the swaying palm trees. Nearing sundown, the beach at Tanjung Gelam presents a spectacular sunset which will make it a perfect experience to end your day.

If you wish to enjoy the splendor of the islands from a height, be sure to hike to the Love Hill. Here you will be presented with the mesmerizing views of the vast open sea and the beauty of nearby islands. At the Joko Tuo Hill, there is a skeleton of a giant whale that is placed here as a monument to honor the fish in the sea.

At the main island of Karimunjawa, you can also explore the 10.5 square kilometer mangrove forest and nature's beauty that lies within. Situated only about 2Km from Karimunjawa's main harbor, you can reach this place on foot or by bicycle.

Entering the forest, you will be greeted by lush mangrove trees and schools of little fish swimming along the beach. A wooden raised footpath made from old and dead mangrove wood will take you deeper into the forest. The trekking route is winding with lots of turns, and adds to the surreal tranquil sensation far from the humdrum of concrete jungles you face every day.

There are about 45 species of mangroves in 25 families here. Among others, here you can also find rare species of mangrove Scyphiphora hydrophyllacea or locally known as Duduk. While dominating the forest is Exoccaria Agallocha or as the local call it Betah. Among the mangroves, you will also encounter a number of endemic wildlife, from black-tailed monkeys to a variety of birds.

Reaching midway in your adventure, there is a gazebo and a watchtower where your eyes can gaze upon the beauty of the vast stretching mangrove forest as well as the many beaches and mountains nearby.

Don't forget to bring a bottle of water since the heat of the scorching sun will eventually get to you. Also, remember to have the batteries of your cameras and mobiles at full and make room in your memory cards because you will definitely want to take selfies and lots of pictures here.

How to get here

With improved accessibility, you can now reach Karimunjawa from Semarang (the capital city of Central Java Province) and Surabaya (the capital city of East Java Province) by air. In both cities, Susi Air serves flights to Dewandaru Airport in Karimunjawa twice a week on Thursday and Friday. From Semarang, the flight will take about 30 minutes, while the flight from Surabaya will take about 40 minutes.

From the harbor at Jepara Regency, you can get to Karimunjawa Archipelago by ferry. The Siginjai Ferry departs from Jepara on Monday, Wednesday, Friday, and Saturday. As for the return trip from Karimun to Jepara, the ferry operates on Tuesday, Thursday, Friday, and Sunday. The ferry trip will take approximately 4 hours. There is also the Bahari Express Ferry that will cut the trip to just about 2 hours. On Monday and Saturday, Bahari Express serves the route from both Jepara and Karimunjawa. On Tuesday and Friday, the ship only departs from Jepara, and on Wednesday and Sunday, it only departs from Karimunjawa.